Pearls are gemstones that don't actually exist in the game as of yet, though they are likely to feature in a future release. The creature definitions for the mussel and oyster indicate that they leave pearls with a [PEARL] tag, but the tag is unimplemented, they do not actually appear in the game, there is no accessible job for harvesting them, and pearls don't have a (probably necessary) material definition. However, orders to "decorate items with pearl" can still be issued from a craftsdwarf's workshop, and these jobs can be performed if you create a material with the [PEARL] tag, and add it to a creature's definitions so that it is yielded as a butchering return.

In the realm of organic materials that have yet to be implemented, pearls sit adjacent to amber and coral; all three have been present since initial release, but none have yet been established into the game. 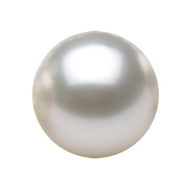 If a material is modded into the game with the [PEARL] tag, artifact gates made out of the material will sometimes generate in vaults.