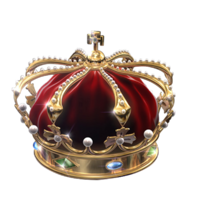 Gem setter is the skill associated with the gem setting labor. Gem setters encrust furniture, finished goods (excluding tools), and ammo (including siege ammo) with cut gems. It is not currently possible to decorate weapons and armor with gems, unless the armor is made of cloth. A high level of gem setting allows a dwarf to set gems faster and with better quality, making the decorated items more valuable.

Rough gems, which are found by miners, have to be converted to cut gems by a gem cutter before a gem setter can use them. Gizzard stones are a type of cut gem and can also be used by gem setters. Large gems, which are sometimes created instead of a cut gem, cannot be used for gem setting, as they are finished goods. (You might be lucky enough to be the proud owner of a magnificent <<☼Large (Insert rare gem name here)☼>> (This is a masterful quality large (Insert rare gem name here).) This object is adorned with hanging rings of (Insert worthless gem name here).)

Because there are a very wide variety of gems in most regions, and some types of gems have pretty high material value, adding decorations of different types of gems is a good way to create items with very high value for trade or nobles.

As with gem cutters, gem setters can be easily trained by ordering them to set common stone such as basalt, mudstone, diorite, and schist.

In the base game, it is not possible to directly specify which item will be encrusted, however control over the process can be exerted by creating an intermediary stockpile linked to take from your main stockpile and give to the workshop, then adjusting its settings to match whatever item(s) you wish to decorate (for instance, a masterwork gold throne for your monarch, or low-quality clothing if you're training a novice gem setter). Your gem setter will refuse to use any item that is not stored in a linked stockpile; you can then selectively forbid items in the stockpile to control exactly which item will be decorated. (If you do this, remember you will also need a stockpile link that provides gems to the jeweler, as workshops that have any Give links must get all their items from links. The same intermediary stockpile could be used if you don't mind mixing your gems with the items being encrusted.)

Another problem in the base game is the number of Encrust Gems jobs required: one per type of gem. Gem cutting and gem setting can be quite tedious to manage, as one workshop job is required per type of gem, and can only be started when at least one cut gem of that type is in stock. A typical fortress will likely have dozens of available rough gem types, necessitating many separate jobs - spread across many separate Jeweler's workshops due to the 10-jobs-per-workshop limit. Even when low value gems are avoided, this will still likely result in a regular stream of jobs suspending as stock of that gem is depleted, and much manual work re-enabling them: potentially to only set a couple more gems before the job suspends again!

In summary: Gem Setting jobs suffer from two inconveniences that are in effect the opposite of each other:

Both of these can be fixed with the use of DFHack.

DFHack: the content in the following section requires the use of DFHack

The utility DFHack can largely resolve both of the problems described above, and in doing so facilitate an elegant, automated gem cutting and encrusting production line.

To proceed, first ensure you have DFHack installed and are running with its default config enabled. PyLNP users can simply set DFHack to Yes on the DFHack tab, then relaunch the game (other launchers likely have a similar, easy DFHack option.)

Using DFHack to create a single job that will Encrust with any cut gem:[edit]

Using DFHack to specify the items encrusted by an Encrust With Gems job:[edit]

Putting it all together: using DFHack to create a high-value gem cutting/encrusting production line[edit]

This annotated screenshot shows an example: 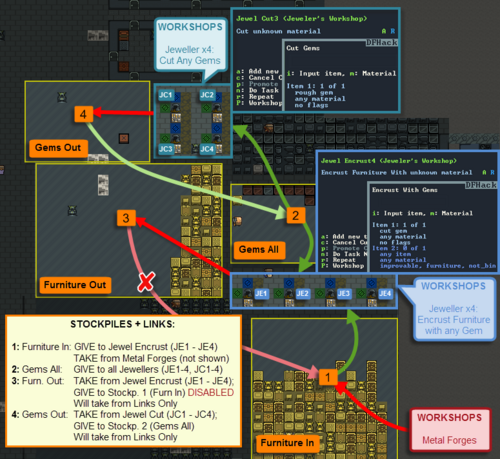