Unsmoothed room (left) and a smoothed one (right).

Only natural stone walls and floors can be engraved. Soil cannot be engraved. Engraving increases the value of a smoothed wall or floor and gives it a quality level, which is dependent upon the engravers’ skill. While experienced dwarves are more likely to engrave historical events than a novice, it is unclear if personality has any effect. Low quality or unwanted engraved floor can be redone by carving a track over it and then smoothing the tile.

Fortifications are semi-permeable walls that allow some objects, such as projectiles and liquids, to pass through them. They can be created in natural and constructed stone walls as well as constructed from the build menu.

Tracks can be carved from natural stone floors and ramps, as well as constructed from the build menu. They are used to transport minecarts which are tools used mostly for hauling.

Slabs are created at a mason's workshop and engraved with the victim’s name at a craftsdwarf's workshop. They are a common alternative to coffins when a body cannot be retrieved (whether due to invaders, an extremely unfortunate accident, or simply large amounts of fun). They can also be used as a more efficient alternative to a statue, as they do not block movement. The engraving on a slab does not have a quality level (though the slab itself does, when made by a mason).

Having engravers smooth large areas can be a good way to train them since it doesn’t consume resources, doesn’t create garbage, and will not produce low-quality results. It also builds experience very quickly at higher skill levels.

For repeatable training, minecart tracks can be carved into smooth stone and then smoothed over. This cycle can be repeated indefinitely, and builds experience during both halves of the cycle. Due to minecart tracks only being designated one row/column at a time, this is rather designation-intensive.

Players concerned with using as few non-renewable resources as possible can instead resort to building constructed walls, designating them for fortification engraving via d-a, and de-constructing them afterwards. Since fortifications don’t have quality, this will never cause a negative thought for the engraver. 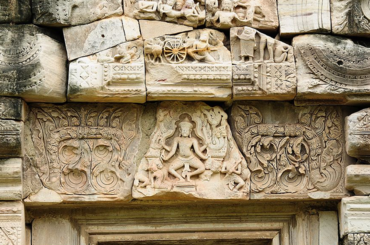 Stone detailing in an ancient city in Pimai. Made with love and tools, but mostly tools.
Retrieved from "https://dwarffortresswiki.org/index.php?title=DF2014:Engraver&oldid=269790"
Categories:
Hidden category: