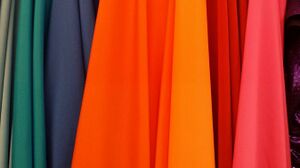 Cloth of many colors.

Cloth is a versatile crafting and medical good, vital to the long-term health of almost any fort.

Cloth can be used to produce clothing, bags, and ropes at a clothier's workshop. While a fort's need for bags varies based on the particular industries it pursues, and chains can accomplish anything a rope can, every fort will find itself in need of new clothes for its inhabitants if they wish to avoid the negative thoughts associated with nudity. The other material that fits this need is leather, which is arguably a less automated, more complex industry to get running.

Additionally, cloth is the only material which can be used in hospitals as wound dressings. Dwarves will store a small supply of cloth in an active hospital zone for this purpose, if any is available. Each cloth item brought in adds 10,000 'cloth units' to the hospital's inventory.

At a craftsdwarf's workshop, cloth can be used to make trade goods. Empty bags, quivers, cloth crafts, and clothing can be decorated with cloth as well.

You can dye cloth before working with it in order to increase its value. Producing masterwork items from masterfully woven and dyed cloth can lead to remarkably high value items, especially when using rarer, more valuable dyes.

Cloth is produced by weavers, who will take plant fiber, yarn, or silk thread (but not hair thread) to a loom and weave it into usable cloth. This means that a fort can produce its own cloth in a number of ways. For a detailed breakdown of the process, see the textile industry page.

Silk cloth is produced from webs, whether they're from a vermin cave spider or a rampaging forgotten beast. If you have an idle loom, it will automatically generate Gather Web jobs for your weavers to carry out. They will seek out webs, convert them into thread upon picking them up, and then haul the thread to a loom to weave into silk cloth.

Besides the ubiquitous pig tails that nearly all forts have access to, there are seven above-ground crops which can be farmed and used to produce cloth, with each cloth produced requiring one plant thread. All of these are processed at a farmer's workshop before being brought to the loom for weaving.

Sheep, llamas, and alpacas can be sheared for their wool at a farmer's workshop, which can then be processed at a loom into cloth. Alternatively, butchering these creatures will produce wool as one of its products. Although trolls are also woolly, dwarves can neither shear nor butcher them, because only tame trolls are shearable. With mods, trolls even shear themselves.

Cloth is a common trade good brought by all civilizations, particularly if your fortress is running low on clothing. Elves tend to bring rope reed cloth, humans bring wool, and dwarves bring pig tail. It is entirely possible to run your clothing industry off of the cloth imports brought by these caravans, but it can be rather expensive.

Normally, cloth will be stored in designated cloth stockpiles, with multiple units of cloth fitting into bins if any are available. Hospitals will instead store cloth in chests or bags if you build those within its boundaries, though you may instead use cloth stockpiles if you prefer.

Additionally, you may also make cloth by weaving adamantine thread. However, this is generally seen as a wasteful practice; adamantine clothing wears out just as quickly as mundane clothing, while adamantine wound dressings offer no additional health benefits.