See location for information about the placement of fortresses in Fortress Mode.

Sites are artificial or inhabited features in the world. They're notable for being named individually and for being referred to in adventurer mode quests.

Note: Specific information about buildings is based on observation in adventure mode and may be incomplete or outdated

Built on a "pseudo-grid pattern"; i.e. the site is divided into 81 16x16 grid spaces, and each such space only contains one building (keeps, temples, etc. occupy more than one square). Buildings show up on a site map as they are discovered.

All structures made of constructed wooden floors. Keep has block walls and floors, other buildings have log walls/floors.

Buildings have ramps down towards the doors or pillars below them down to the ground where necessary when built on uneven terrain. When built into a hill they will sometimes have wooden structures on the roof to hold up the ground above them.

Represented by î and ¶ on the world map.

Elf and Dwarf civ forest retreats contain no buildings, and are just a bunch of elves standing around.

Human civ forest retreats can contain the same buildings as a human town and are generally indistinguishable except for being on a forest instead of plains.

Represented by Ω on the world map.

Represented by • on the world map.

Destroyed buildings of other sites. Furniture is gone. Some walls remain walls even when there are no adjacent walls; others are pillars. A keep was observed intact in a Human ruin (are there ruins of mountain halls, dark fortress, etc.?)

Represented by µ, µ, or µ on the world map.

Cities made of above-ground towers of smoothed natural obsidian. May feature temples. may be occupied by an Invader force. It is possible for a dark fortress to be absolutely nothing but a plain.

Represented by П or П on the world map. 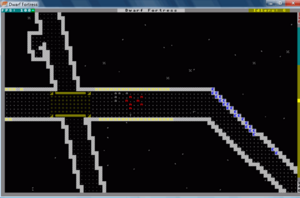 An underground tunnel crossing a chasm via a bridge. Antmen, naked mole dogs, and other creatures are visible to the right. This tunnel connected a couple of goblin fortresses together.

A tunnel emanating from a dark fortress, as seen in the local view.

Some mountain halls and dark fortresses have a staircase down at the bottom level, leading to a narrow hallway to another (possibly multi-level) single staircase down to a (walls/floor not smoothed except immediately around the staircase) 7-wide tunnel leading ultimately to another site. Hostile creatures can be found in these tunnels near sites or chasm crossings, and they vary in Z-level, with ramps up or down across the full width of the tunnel (orthogonal/diagonal transitions near z-level transitions sometimes cause slightly narrower ramps). There are bridges over chasms; these are 5 wide made of floors (Phyllite block even though the surrounding stone was Gabbro) and constructed walls at each side and a 3-tile approach at each end. The one I observed was open to a small cave in the side of the chasm which was, presumably, the source of the antmen and ratmen the tunnel was infested with. The route of the tunnel seemed much more circuitous than it should be to connect between the two sites in question. You cannot Travel while in a tunnel.

[SHOW_EMBARK_TUNNEL:ALWAYS] has to be set in init.txt for tunnels to be visible on the local map, as pictured at right. They will usually curve around other underground features (chasms, rivers, etc.), except when this is not possible through a given local section, in which case they will cross the other feature(s) via a bridge.

A pair of roads passing through a human city

Human towns and cities are sometimes connected via a network of roads. Dirt roads are represented by a black line, smoothed roads by a light gray line, block roads by a white line.[Verify]

Not strictly a site, these move around the map in adventure mode.

Represented by (some tile, looks like a light gray horizontal line?) on the world map.