To begin playing Dwarf Fortress, you must first create a world to play in. When you enter the world creation screen, you are presented with a screen full of options: 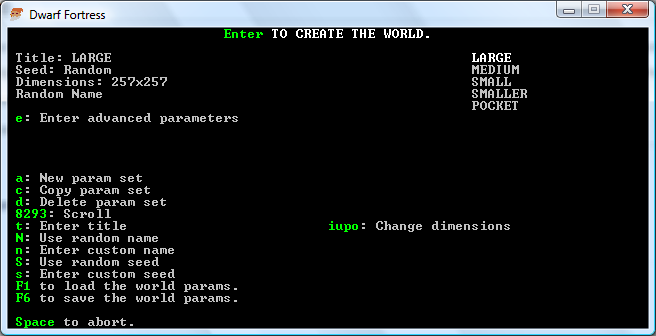 Once you choose "Design New World With Parameters" you will be brought to the parameters screen. (Choosing "Create New World Now! instantly creates a new world with the parameters which are listed second in the world_gen.txt file). Pushing Enter will start creating a world using the default (or selected) parameters. At the upper left hand corner, you will notice several settings. Here is a quick overview:

This is just a name for your world generation template. Once you have multiple templates, you can select the template you wish to use using the arrow keys or the numeric keypad.

Generating a true random number is an impossible task for a computer. Typically, a pseudo-random number generator uses a specially selected mathematical sequence to create what appears to be a random number. By feeding the same seed as another player directly into the generator, a player starts world generation at the same point in the sequence, which theoretically should result in an identical world for both players. (Click the following link for more information on random seeds.)

This is where the name for your world will be displayed. You can enter a name or choose to have one randomly generated.

On the right hand side of the screen will be a list for all of your saved parameter templates. By default, there are five parameter sets labeled LARGE, MEDIUM,SMALL,SMALLER, and POCKET. Smaller worlds are generated more quickly, but have less civilizations and less chance of generating an embarkment site with the combination of features you'd like. You can change the world size to something other than a square using the keys i, u, p, and o. Note that only available world widths/heights are 17, 33, 65, 129, and 257; even directly editing the world_gen.txt file will not let you use other sizes than these.

You can select which parameter set you would like to use for world creation using the arrow keys ( ↑ and ↓ ) and the page-up-/page down keys, or the numeric keypad ( 8 2 9 3 ).

When you are ready to create your world, push Enter. You may be prompted to save your parameters if you have changed them from the default. The generator then begins to generate a world based on fractal algorithms. The process of creating a world can be very time-consuming, as any invalid maps are thrown out upon detection. Do not be surprised if it generates over a hundred separate worlds before creating one that is acceptable. Generating a world with advanced parameters that are very far from the default can cause many worlds to be generated and rejected for not meeting the requirements. 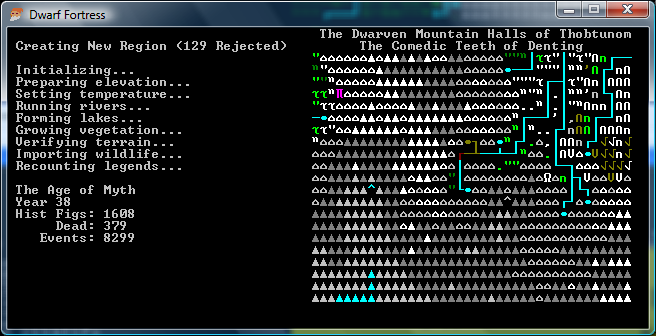 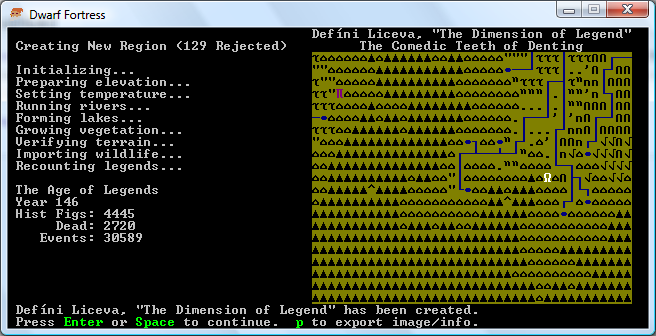 When the world is created, you will be given the option to export the map to a graphic file by pressing p. This will create a large BMP format ASCII graphic of the created world. You can run the compress_bitmaps.bat batch file that comes included with the game (as of 33g) in the main dwarf fortress folder to convert the bitmap files to about 90% smaller .png files.

When you are finished, press Enter or Space to return to the title screen.

You can use this example to use the command line to create many worlds at once, without all the hassle. Copy the following code and save it as a batch (.BAT) file. This file will create 7 regions using random names and random seeds. It will also automatically output the parameters and an ASCII and detailed map for each of your worlds.

Note: Make sure you don't already have region 1-7 in your save directory.

Note: If you are using a version of Dwarf Fortress that includes a space in the .exe name, use the following command to achieve the same results.

Note: If you are typing this into a command prompt rather than making a batch file use %i rather %%i

Copy the following code into a file, and then make sure it can be executed by doing the shell command chmod +x filename. It should be placed in the same directory as dwarfort.exe, and also be run in that directory.

Note: Make sure you don't already have region 1-7 in your save directory.

You can also type (or copy-and-paste) this file into an interactive shell (if you use Bash). If you type it in by hand, you can leave out the line with #! and the following blank line, since they won't do anything.

You may be curious about what's happening behind the scenes while your world is being generated, these are the steps the program goes through:

Note: Information on this list is largely taken from the 10 page interview of Toady at Gamasutra

Rejects can occur at any step up to terrain verification. They are the result of certain world variables going outside of ideal conditions, and result in the currently generating world being "tossed out" and another rolled up.

The number of potential rejects is arbitrary, so if you are using a slow computer, or simply don't want to wait through world generation, you can download one of the Pregenerated Worlds. However, some find watching their world unfold to be a worthwhile experience. Also note that as Dwarf Fortress rises in versions, world generation will most likely become more interesting, particularly once overland armies are implemented.