A tiny orange marine fish that lives inside the tentacles of a poisonous invertebrate. 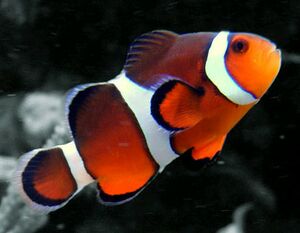 Clownfish are vermin-sized fish that can be caught by fisherdwarves and processed at a fishery. They are found in tropical oceans and can be caught year round.

While dwarves have an even chance of catching males or females, this is not the case in real life. In real life, the clownfish sex ratio is not even, since all clownfish are born male, becoming female later on. A colony of clownfish living around an anemone is comprised mainly of males, with only the most dominant fish being female. When the clan matriarch dies, the most dominant male changes its gender and becomes the new matriarch.