Clothes are items made out of cloth or leather, and worn and owned by sapient creatures. While similar to armor, clothes have an armor level of 0, and will wear out over time. Some wearable leather items, including leather armor and boots truly are armor and will not be worn by civilians.

The primary reason civilians wear clothing is for modesty, see the thoughts section below for details. Some dwarves will also need to be extravagant, so clothing with quality or decoration bonuses will satisfy that. A particular benefit of footwear is to keep your dwarves from stepping barefoot in contaminants that can be dangerous.

Due to the multiple value modifiers that can apply to finished clothing, they can be useful as a trade good - even tattered clothing can fetch a fair price, so such clothes can be useful twice.

Clothing can be made from cloth at a clothier's shop or leather at a leather works. It will be sized for the creature that does the job, see the size section next for details. Dye cannot be applied to clothing - to make dyed clothes, the cloth used to make clothes or the thread used to make the cloth must be dyed first. Clothing usually worn in pairs, like mittens and socks, will be made in pairs, though their quality levels can differ. Currently, any clothing job consumes one whole unit of cloth or leather, regardless of the size of the piece produced.

To maximize value, use a custom stockpile to collect high-quality dyed cloth and link it to a clothier's workshop producing dresses or robes, and set the workshop profile to only allow skilled workers.

Clothing and armor all have a size associated with them, and equipment made for one size of creature cannot be worn by sufficiently larger or smaller creatures - the acceptable range is between ±1/7th of the creature's size. FotF Reply For dwarves, this applies to clothes and armor worn by humans and trolls (which will appear to be large * as well as kobolds (which will appear to be small); goblins and elves are the same size as dwarves, so their clothing and armor can be equipped rather than being limited to melting (in the case of metal armor) or using as trade goods (especially once decorated).

Any clothing/armor that isn't small or large is one-size-fits-all, and can be worn by any dwarf, from the smallest child to the biggest adult.

As of version 0.42.01, your dwarves can create clothing and armor in any size to accommodate the needs of non-dwarven fortress residents. To do so, request the clothing or armor to be made from their respective workshops as usual, then in main workshop menu look at the details of the job. filter for the race you want to make clothing for and press enter twice. Alternatively, clothing made by a creature will be sized for that creature. Sizing clothing for cougar or hyena men allows it to be worn by both humans and the dwarf-sized races.

Clothes are finished goods, and will be stored in that type of stockpile, if not claimed by dwarves, optionally in bins. Dwarves will store their personal clothing in their rooms, either directly on the floor, or in cabinets. Tidy dwarves will rarely relinquish their tattered clothing, instead accumulating a large collection of worn clothes in their rooms. Owned clothing cannot be claimed or hauled by other dwarves, though if not currently worn or in the owners quarters, it will eventually revert to unowned after one season, making it available.

Clothing wears out over time; while worn, it gains one level of wear every two years. While stored properly, either in a (non-refuse) stockpile or a dwarf's personal quarters, it will degrade very slowly (one wear level per century, automatically reduced to one wear level per 20 years if using DFHack). However, clothing in a refuse stockpile degrades very quickly, which is another way to dispose of worn or lower quality items cluttering up a fortress. One way to take advantage of this is designating a garbage dump activity zone over a refuse stockpile, and then marking all the discarded clothing for dumping. Further, setting the refuse order k - Dwarves Save Other to Dwarves Dump Other will automate dwarves dumping worn-out clothing, and other degraded items. Clothing can also be damaged if the wearer takes damage, especially if the attack penetrates or from harder materials. This is all true even for clothing made from special cloth. Dwarves will replace their degraded clothing themselves, if appropriate clothing is available in the fortress. (supporting bay12 forum post)

Adult dwarves get unhappy thoughts if they are naked, or wearing tattered clothes. Babies do not wear clothes, but all adult and child dwarves will claim and wear clothing automatically, but will not automatically make any if none is available. Dwarves may incur several different clothing-related bad thoughts from:

Clothing thoughts are quite strong, and stack with each other. Tantrum spirals are likely unless you produce sufficient footwear, upper-, and lower-body-covering items. Thankfully, armor can also prevent most negative thoughts, and has the advantage of not being subject to wear, in addition to affording better protection. If you tell your militia-dwarves to replace normal clothes with their uniform, make sure you have armor to spare when conscripting cannon fodder legendary cheese makers, as they'll happily strip naked even if you don't have a uniform waiting for them. You can also include a layer of cloth "armor", leggings, and especially socks in the mix to prevent nudity unhappiness in case of a shortage of real armor, but be warned: your dwarves will not automatically replace worn uniform-assigned clothing, leading to a different set of unhappy thoughts.

If you find it easier to produce plenty of armor instead of clothing, you can also group all your civilian dwarves into squads and assign them a uniform covering the basics. This not only ensures you don't have to offer them replacement clothes, but also ensures your entire population is at least slightly better protected. Having everybody grouped up into squads also might come in handy if when something nasty shows up in the midst of your civilians while your soldiers are busy elsewhere. The disadvantage of this is that the heavier armor will slow the civilian dwarves down.

This was the beginning of the dwarven obsession with socks. Long ago, socks were plentiful in dwarven kingdoms across the land, and the bearded ones paid little heed to what adorned their feet. But after the proud citadel of Nogrithog destroyed itself in a terrible civil war over a dispute concerning sock shortages, the production of which they were completely and utterly ignorant, the entire dwarf race everywhere in the universe vowed to never let this happen again. Dwarves made sure to stockpile woolen, silken, and even cloth footwear against the unthinkable happening ever again. Children were frightened with the story of the Great Sock War even before they stopped suckling at their mothers' breasts to indoctrinate them in proper sock hoarding behavior, and to get unruly children to behave: "If you don't stop pulling Catten's braids, Sibrek, all the socks will disappear!"

So great is the dwarves' fear of a sock shortage that they will sacrifice their own well-being and even their very lives to make sure that not a single sock will go overlooked. It is unknown how dwarves everywhere could possibly know how one dwarven civilization in a remote and utterly unimportant continent on a forgotten minor world destroyed itself. Most believe that this is once more the touch of Armok on their sodden, constantly intoxicated brains. 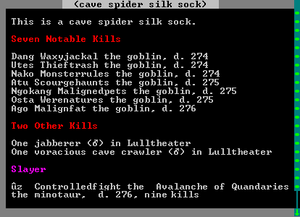 The bond between a dwarf and his socks is both wondrous and terrible. The most hardened warrior finds his socks so warm and comforting that he is frequently seen wearing but a single boot -- why should he need steel to protect his other foot? He already has a sock on it! Upon losing his unarmored foot to a goblin's blade, he will console himself in the knowledge that at least his foot still has its sock on.