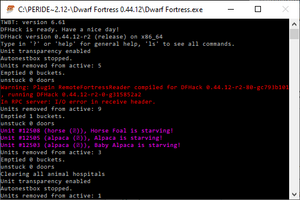 DFHack is a utility that can be used to improve UI, automate some aspects of the game, add features, fix bugs, make a specific one-off change... or just straight-up cheat.

DFHack is an extensive standardized memory access library, packaged alongside a suite of basic tools that use it. Currently, tools come in the form of plugins, as well as Lua scripts. For developers, DFHack is a comprehensive, standardized memory access package that unites the various ways tools access the Dwarf Fortress memory space, allowing for easier development of new tools. For users, it is a very useful utility complex that allows users to tweak their games in numerous ways in-game. This is probably one of the most useful utilities for DF, acting as an advanced expansion that fixes, improves and adds to the game in many ways, and is usually included in recent versions of the Lazy Newb Pack on all platforms.

For an exhaustive list of and manual on the commands in the utility, see the documentation. For a quick list, with brief descriptions, of the commands available to you, enter the command ls or dir at the command prompt (DFHack#) in the DFHack terminal window. As of v0.47.05-r6, the list has a total of 279 entries.

The ASCII window provided by DFHack for v50 of the game.

User Interface improvements, such as:

Various automations of jobs, and fortress management, such as:

Other scripts and plugins, such as:

Gameplay extras, such as:

Provides a protobuf-based (currently v2.4.1) RPC connection to the game, enabling remote clients like Armok Vision. The service listens on 127.0.0.1:5000 (configurable within dfhack-config/remote-server.json).

Currently there are no change-based or change-driven notifications, so remote fortress clients must perform the expensive operation of polling the desired volume every frame (via e.g. GetBlockList). Additionally, the sidebar menu state is shared with the native view, to avoid reimplementing construction material dependencies.