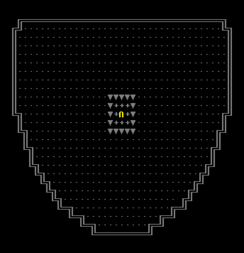 A vault (■) is a site that constitutes the ultimate challenge for any adventurer. Vaults are created by demons during world generation as part of the process of escaping into the world. After constructing the vault and a slab, demons enlist the help of a deity with a relevant sphere, and the deity performs a ritual at the vault to bring the demon physically into the world (for example, a god associated with Fortresses may release a demon associated with Fortresses). The slab used in the ritual is then stored in the vault, and various guardian angels make it their duty to defend the vault, and the slab, against adventurers.

After the demon has been brought into the world, it returns to the underworld spire from which it originally emerged. When history begins, goblin civilizations build a dark fortress around the spire and make it their capital, with the demon their leader. It is not known for certain whether there are always the same number of goblin civilizations as escaped demons, but it seems to be the case.

Vaults are large cylindrical structures constructed from slade, descending many Z-levels into the ground and filled with a mostly linear chain of rooms (similar to those found in sewers and tombs) occupied by the angelic guardians and containing occasional parkour-esque climbing challenges. Along the way can be found several levers linked to vertical bars which must be raised in order to progress further. At the bottom of the vault is a giant slab inscribed with the demon's true name, and this knowledge allows you to track it down and either banish it or compel it to serve you (join you as a companion).

There are three types of angels you will meet in vaults: assistants (bestial creatures with random features and low combat skills), soldiers (sentient humanoids with weapons and armor made of divine materials and Talented-level combat skills), and the archangels (gigantic beasts with size relative to forgotten beasts, and possessing Grand Master combat skills). Every vault has exactly 50 assistants, 25 soldiers, and one archangel. Vaults will actively replenish themselves with new angels after each visit, meaning the angels must be defeated in one go, without any rest. However, the Archangel will keep the wounds received between runs, so it's possible to defeat it eventually.

To find a vault, you need to ask a member of a civilization by "ask about the surrounding area" they will tell you one nearest site including the vault, by spamming the same question they will say The Farmer Urist: [vault name] is in [location]. In a time before time, the [devil name] created [vault name]. The radius size told for the site is limited but how big it is, is still unknown, the farthest known is 9 tiles away from the map, if the demon is killed during world generation, the vault is likely never mentioned.
Also, if all civilizations are extinct you will be only a human outsider in adventure mode, by that, you can start from the vault as a stranger.

Attempting to conquer a vault and retrieve its slab will be a difficult challenge for even the best-equipped and skilled adventurer. It is recommended to have at least high physical attributes, mastery of at least one weapon skill, and a breadth of capability in others. The rewards will be worth the effort and risk; knowledge of the slab and the divine armor and weapons from felling angel soldiers will tremendously improve your adventurer. 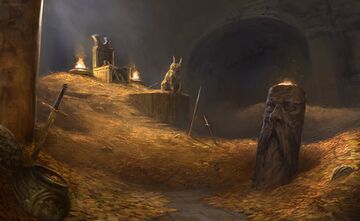