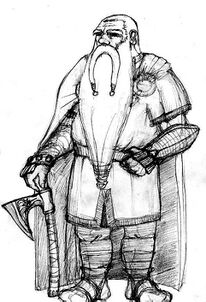 An engraving of a dwarf.

Dwarves are "intelligent" humanoid creatures that live in fortresses carved from mountains. They are the featured race of Fortress Mode and are also one of the races playable in Adventure Mode. They are mainly interested in acquiring wealth and rare metals, especially adamantine. They are alcohol dependent and work slowly if deprived of it for long. Their most hated enemies are the goblins.

In accounts of exploits or fun, the generic name Urist is sometimes used in place of any specific dwarf name. Several nicknames for dwarves also exist; one of the more common is dorf*, but there are others that are less polite.

Dwarves are a trading race and will send a caravan every year in the fall. Immigrants will be attracted to your fortress as your wealth grows, prompted by the stories of your wealth and the goods that the dwarven traders bring back from your fortress. The immigrants arrive every spring. If your fortress is particularly successful, some immigrants might even decide to come early in smaller groups and arrive in late fall in addition to the wave that normally arrives during spring. Dwarves die at around 150-170 years of age.

You cannot start your fortress where another fortress exists.

If you start your fortress near an existing fortress (not one you built), the large human caravan and dwarven traders will be replaced with a large dwarven caravan. This means you will not receive an outpost liaison (could be a bug), but you will receive large quantities of dwarven made goods, including a few bars of random metal and several pieces of steel armor of random quality (usually you get that anyway).

Dwarven fortresses do not have any shops, but usually have a variety of fighters to recruit. You can receive quests from their monarch at their capital city.

Dwarven characters always start with steel or iron weapons and armor, making them the best-equipped race. Unfortunately,human armor is too large for them to wear, and humans are the only race with shops, so all armor upgrades will have to come from looting dwarven fortresses. Most human weapons must be wielded two-handed by dwarves, due to their size.

Dwarves have the highest natural armor of the adventuring races, at +1, but are one size smaller than elves and humans, so they cause less damage and absorb less damage. Dwarves are the only race that sometimes enters a martial trance when beset by many foes, which gives them combat bonuses.

In real-life mythology, dwarves are much like humans, but generally prefer to live underground and/or in mountainous areas. In their fortresses they have accumulated treasures of gold, silver, and precious stones, and pass their time fabricating costly weapons and armor. They are famed miners and smiths, although, like humans, they can specialise in any number of trades. Generally shorter than humans, they are on average stockier and hairier, and usually sport full beards. Though slow runners and poor riders, dwarves are excellent warriors and defenders of their strongholds. Dwarves have the ability to forge magical items, which shows off their culture's and species natural craftsmanship. For instance, dwarvish smiths created some of the greatest and most powerful items of mythology, which inspired the in-game strange moods and Legendary artifacts.