A syndrome is a disease or effect that a poor hapless creature might get through encountering certain creatures, extracts or vindictive modders. They generally cause unpleasant and frequently fatal symptoms over a short to long period of time, but some will clear up over time or with the assistance of a doctor. A Hospital is required to diagnose and potentially treat the syndrome. 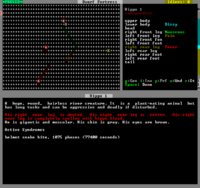 An example of a syndrome in effect. This hippo did not ultimately survive the encounter despite one bite being the only injury sustained.

1. For small creatures such as humans and dwarves, paralysis tends to result in suffocation.
2. Necrosis of the brain will eventually result in instant death once the brain rots away completely.
3. Titans, forgotten beasts, and demons have a chance to have a randomized syndrome. These range from pointless (mild blisters from inhaling boiling blood) to instantly deadly (Severe necrosis from a contact poison attached to a breath weapon/creature made of blood.

The anatomy of a syndrome[edit]

Mechanically, syndromes are bundles of tokens attached to a material - they're confined to creature materials in vanilla DF, but it's a simple matter to add them to inorganic materials. When the material is injected, touched or inhaled (depending on the syndrome), the creature suffers the predations of a nasty disease or poison. Here's an example syndrome, taken from the Giant Cave Spider raws.

If you are having troubles getting the syndromes to work (ie, in combat reports, getting "supersnake n/a splatters~etc"), then simply throw the venom template into the actual creature's raw, which is what the LOCAL_CREATURE_MAT actually calls on; the venom being in the same file.

The first line, USE_MATERIAL_TEMPLATE, is creating a new material, called POISON, using the CREATURE_EXTRACT_TEMPLATE as the basis. After this, the STATE_NAME and STATE_ADJ tokens are used to define the names and adjectives assigned to different states of the material - GAS, LIQUID and ALL_SOLID, in this case, though ALL is also a valid token. At this stage, you can use any material tags like MAT_FIXED_TEMP or similar to set further material properties, though this usually isn't necessary.

This tag determines whether a poison enters the blood or not. If it is not included, the poison will splatter (if liquid) or flow (if gas) over the affected body part instead when injected. If you're using a contact poison, leave this out. Necessary for injected poisons.

This tag ends the material details and begins the definition of the actual syndrome.

This one is self-explanatory - the name of the syndrome as it will appear in-game.

This token defines what CREATURE_CLASS will be affected by the syndrome. Most creatures are classed under GENERAL_POISON. Multiple tokens can be used in a single syndrome.

As above, but makes class immune.

This token defines which creatures CANNOT be affected by the syndrome - useful for addressing specific instances within a population, such as a specific caste or an individual creature that falls under GENERAL_POISON. Syntax is [SYN_IMMUNE_CREATURE:creature:caste]. ALL can be used for the caste.

As above, but makes creature or caste susceptible.

This token determines the method of infection - injected syndromes must be injected via a creature attack, while contact syndromes result from any contamination of a creature by material splatter (such as blood) and inhaled syndromes must be inhaled in gaseous form, such as from boiling or a creature breath attack. Any combination of these tags can be used. A fun variation on the usual creature injection routine is to create a material with a SYN_CONTACT syndrome and have a creature use it for blood - this tends to end poorly for any predator that chooses to attack them.

This is one method for getting a poison into a creature. If [ENTERS_BLOOD] is applied, it will be injected into the bloodstream. Otherwise, it will just splatter over the area. Put this on a creature attack. Substance type (gas, liquid, solid) does not appear to have an effect. The numbers on the end are minimum and maximum.

CE_X, or creature effect tokens, are the real meat and bones of your syndrome. They're detailed below.

Each and every syndrome has a number of creature effect tokens, represented by CE_X - these lovely little beauties determine exactly how the poor creature suffering from the syndrome is affected. An example CE token is as follows:

In this example, we have an effect that will always cause severe necrosis in whichever bodypart it touches, so long as that bodypart is vascular and that the creature is not able to resist it in some manner. The effect begins shortly after the syndrome is contracted, peaks 1000 time units afterwards, and finally ceases another 1000 time units later.

As a general rule of thumb, so long as CE_X starts the string and START/PEAK/END end it, the order of the intervening tokens isn't important.

The effect type. This can be a number of different tokens, as detailed in the table below this list.

The severity of the effect. Higher values appear to be worse, with SEV:1000 CE_NECROSIS causing a part to near-instantly become rotten.

The probability of the effect actually manifesting in the victim, as a percentage. 100 means always, 1 means a 1 in 100 chance.

This tag causes an effect to ignore all BP tokens and then forces the game to attempt to apply the effect to the limb that came into contact with the contagion - ie. the part that was bitten by the creature injecting the syndrome material, or the one that was splattered by a contact contagion. If an effect can not be applied to the contacted limb (i.e. IMPAIR_FUNCTION on a non-organ) then this token makes the syndrome have no effect. This token also makes inhaled syndromes have no effect.

Specifies which body parts and tissues are to be affected by the syndrome. BODY_PART can be BY_CATEGORY:x to target body parts with a matching [CATEGORY:x] body token (or ALL to affect everything), BY_TYPE:x to target body parts having a particular type (UPPERBODY, LOWERBODY, HEAD, GRASP, or STANCE), or BY_TOKEN:x to target individual body parts by their ID (as specified in the [BP] token). For example, if you wanted to target the lungs of a creature, you would use BP:BY_CATEGORY:LUNG:ALL. The syndrome would act on all bodyparts within the creature with the CATEGORY tag LUNG and affect all tissue layers. For another example, say you wanted to cause the skin to rot off a creature - you could use BP:BY_CATEGORY:ALL:SKIN, targeting the SKIN tissue on all bodyparts. Multiple targets can be given in one syndrome by placing the BP tokens end to end. This is one of the most powerful and useful aspects of the syndrome system, as it allows you to selectively target bodyparts relevant to the contagion, like lungs for coal dust inhalation, or the eyes for exposure to an acid gas. Not everything takes a target!

This syndrome only affects tissue layers with the VASCULAR token.

This syndrome only affects tissue layers with the MUSCULAR token. Are you seeing a trend here?

This token presumably causes the effects of the syndrome to scale with the size of the creature compared to the size of the dose of contagion they received, but has yet to be extensively tested.

As above, this token has yet to be tested but presumably delays the onset of a syndrome according to the size of the victim.

The details of this table are still being thrashed out by modders, so if you have anything to add, please don't hesitate to hit the edit button!

Non-targeted syndromes will ignore any BP tokens and LOCALIZED tokens.

It's perfectly possible - and quite simple - to add a nasty syndrome to a type of rock or metal - you simply add the syndrome tokens to the material definition in the same manner that you would add them to a creature material definition. The only catch is that since your hapless dwarves will only normally encounter the material in metal, gem or boulder form, a bit of creativity must be used to actually get them inside your citizens - that is, you need to make them 'explosively boil' as soon as they're mined or produced. This has the sad side effect of destroying the actual item - sorry, no highly radioactive uranium this release.

The easiest way to accomplish this is to assign the material a low boiling point, usually just under room temperature, and make sure its temperature is fixed to a point above it.

Now, as soon as this substance hits the open air - by being mined, smelted or reaction-produced at a custom workshop - it will EXPLOSIVELY BOIL, flooding a small area with delicious syndrome-rich gas. Creatures who inhale the gas will be immediately hit with the syndrome you thoughtfully attached to the material definition earlier!

There are a number of other tokens you can use to control the colour and naming conventions of your syndrome material, referred to as MATERIAL tokens.

If you want to really make a creature deadly, you can give it a breath attack to shoot your neurotoxin at your hapless dwarves from range. Some of these attacks have the unfortunate side effect of preventing a critter from using its regular attacks unless the enemy is on the same tile. You decide if it's worth it.

To use a breath attack, place something like the following anywhere in your creature entry:

The LOCAL_CREATURE_MAT:SPITTER_SPIT refers to the material the breath attack will be made of - in this case, it is another material defined within the creature entry.

Keep in mind that you can use multiple breath attacks, which appears to make the creature choose between them at random.