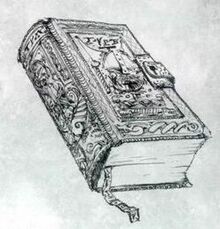 Pain to read without a bookmark.

A book is an item that can be written on and store historical events, knowledge, and art. Books use sheets made from plant fiber (paper), parchment, or papyrus. Books are created by historical figures in world generation, by adventurers, and by scholars and visitors in fortress mode and can also be copied by scribes. Travelers and traders carry books to different sites and libraries, spreading information as a result. There are two forms of books: codices ◘ (sing. codex) and scrolls ∞. Both forms have different methods of creation, but they are identical in function. Codices are known as quires ≡ prior to being bound. Written books are treated as artifacts, with the exception of copies. Original written works are recorded in legends mode and appear in the L Artifacts screen in fortress mode. Books are titled based on their subject matter, with copies identified by "(copy)" at the end of their title.

Scrolls are made from sheets and scroll rollers. Scrolls can be written on and stored right after being made.

Unlike scrolls, codices require a two-step process to be made. The initial form of a codex is known as a quire. Quires can be written on, read, and used as copies, similar to scrolls. Once written on, quires can be combined with a book binding and a thread to create a codex.

Binding a quire into a codex should increase the overall value, however, the transformation currently discards some of the quire's properties (text length, material value, etc.).Bug:9409 This makes codices a terrible way to generate wealth since they tend to actually be worth much less than the combined value of the constituent parts. If trying to increase wealth, it is recommended to leave your scholars' works in quire form.

Decorations such as gems and ivory can be added on unwritten scrolls. Codices cannot be normally decorated, with the exception of untitled codices. Book bindings or scroll rollers cannot be decorated.

It's also possible to raid another culture, hoping to steal their books for yourself. When using the Raid menu, any books, codices and scrolls currently in possession of the target culture are listed along with any artifacts, and so can be specifically selected. See the Mission article for more information.

Written books can be read. Readers will gain information on the subject they read about in a book. Contents of a book cannot impact specific ethics, although personal values are a different matter, and one particular subject can have profound physical effects on the reader. Reading a book will satisfy the reader's need to self-examine and think abstractly.

Adventurers can read books in their possession by pressing I then selecting them from their inventory. Characters must possess a reader skill of at least novice level in order to read a book. This skill can only be leveled up in-game by reading books, which is impossible to do without any reader skill to begin with. Raising the reader skill in advance during character creation (or simply adding some amount of NATURAL_SKILL to one's chosen race in the raws) is therefore crucial.

Fortress citizens and visitors will read available books in a library at their leisure. Bookkeepers do not require a book to update stockpile records, oddly enough.

Unwritten quires and scrolls stocked in a library as writing material will be used periodically by scholars and scribes to write original works and copy existing works, respectively.

Adventurers can write their own books. First, have an unwritten scroll or quire wielded in hand or on the tile where you stand. Press x then select write, and choose the object you want to write on. You will be given a list of memorized content and prose to write about, which includes guides, essays, manuals, chronicles, letters, short stories, novels, plays, poems, choreographs, and musical compositions. For prose options, a random known subject will be used. Writing a book will take up several hours in-game. If you are interrupted by enemies, writing will stop and the writing material will be unused.

Although hardly ideal for the purpose, creatures carrying books have been known to use them in combat, with varying results. The combat effectiveness of the written word is determined in large part by the materials used in the book or scroll's construction. Books are blunt weapons, so heavy metal books will be infinitely more effective than light wooden ones. Fighting with a book trains the Macedwarf skill.

Art books describe poems, choreographs, and musical compositions. Art books are titled after their art piece's name. In adventure mode, reading a book about an art form is one of the few ways to learn it. Presumably dwarves reading art books will be able to perform what they've read at a tavern as well.

Knowledge books include topics on mathematics, philosophy, history, geography, medical science, natural science, astronomy, engineering, and chemistry. They are referred to as manuals.

Books containing "secrets of life and death" are occasionally written during world generation by necromancers and various demonic rulers. Any mortal creature who reads one will immediately learn the secrets to immortality and the ability to raise the dead. Necromancy books can be found in a necromancer's tower among other types of books, including the original slab which the secrets originated from.

Necromancers invading the fortress may bring their books along, which could be necromancy books. Looting a necromancy book and storing it in a library will cause all of the fortress population to gradually become immortal masters of death every time one of them reads the book, and this process can be accelerated by creating copies of the book. Adventurers who have learned the secrets of life and death have a chance to create a new necromancy book when writing a manual.

Books may be autobiographies, or about other historical characters or locations the author has had contact with. Presumably the relevant "Form" topics must have been discovered by an individual's civilization for biographies, autobiographies, etc. to be written. Autobiographical adventure, for example, unlocks autobiographies. Most forms are part of the history branch, but creation of atlases, dictionaries and star charts require other disciplines. Books may also be commentaries on other books.

The content of a book is written as one of many literary forms. The literary form decides the purpose of the text, with different literary forms allowing for certain subjects. Some literary forms need to be "unlocked" by scholars discovering a certain topic, and cannot be written before such a discovery.

In terms of availability of literary forms in fortress mode, manuals will be most commonly written by scholars as the culmination of research. Other forms may be written by scholars or any other figure, but this is a rare event. Adventurers are the most reliable way to get non-manual books inside your fortress. The second best way is to simply trade for them from caravans.

All forms have been found, but currently the precise mechanics behind learning knowledge or receiving a change in values from them is still unclear.

Right now, adventurers can only learn new art forms and academic knowledge from books. If an adventurer reads a book of a given literary genre that requires an academic topic to unlock, this will teach the academic topic, so if an adventurer without academic knowledge reads an autobiography, they'll learn the autobiography topic. For some of the advanced forms, such as Genealogy and the Treatise on Technological Advancement, adventurers may sometimes end up writing an essay. This was asked about in the forum's Future of the Fortress, and the reply indicated this was because books are slightly half-implemented 1.