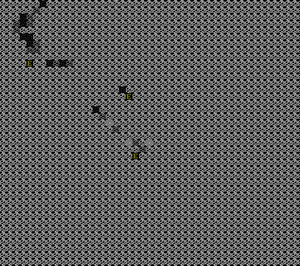 Some elk wandering through a desolate tundra.

Tundra is a very cold and mostly flat biome.

Tundras are essentially a freezing grassland, with no above ground flora of any kind, and no above ground water sources. Unlike glaciers, they do not have a layer of ice. Rivers and other waterways do not exist in tundras, and will in fact stop immediately on the border of the tundra. Lakes and oceans in the same climatic region will be frozen over and exist as a glacier. All of these water features may be frozen year-round.

Embarking in a site with overlapping biomes may result in a river that only exists outside of the tundra. Such rivers will begin to flow normally when the temperature rises high enough, possibly causing the downstream end (if there is one) to drain off the map completely. Channeling should fix this temporarily (although the river will freeze again eventually).

Above ground crops will generally NOT be growable, even in an underground "greenhouse". That said, if you have non-dwarven neighbors, they will still bring above ground plants, but you will be unable to do anything with the resulting seeds other than cooking or trading them.

If you plan to start a fortress on a tundra, find a cavern as soon as possible for wood and water. Players are advised to empty their wagons and move all their goods and population underground as soon as possible, because some tundras are cold enough for your dwarves to freeze to death quickly. Likewise, trade depots should also be built underground, and a tunnel to the edge of the map should be made with a road leading to the absolute edge (must be above ground) and continuing underground to the depot, to encourage merchants to use it and to protect them from said cold.

Caverns are vital, as they are the only source of wood apart from trading. They also give easy access to water, which you would otherwise need to melt ice for.