Town can refer to either of the following:

Adventurers spend much quality time in towns. They come to buy, sell, talk to the people, nobles and divine creatures that live there and occasionally to kill those who have invited their wrath. 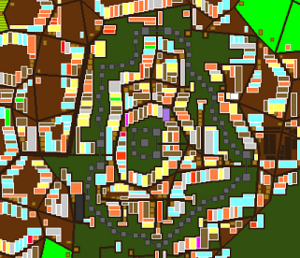 In the middle of the town is a walled stronghold held by many soldiers. Inside of the keep can be found a Lady, other high nobility, Men-at-arms willing to follow you into death, and well guarded treasure. Under the keep is a dungeon, a dangerous but rewarding place to wander.

Outside of the Keep is the realm of the bourgeoisie, who usually trade in vast Markets or districts of shops. Many stray domesticated animals roam through the muddy streets. Other buildings of unknown use exist in a town, such as the temple and warehouse. Below is a list of different shops found in a city. Some cities will not have all of the shops, and a player may have to travel to a different city to browse the wares of an Armor Smith.

The shops that are "common" are common because only animal products (meat, bone, leather) and farm products (cloth and food) are currently produced in any significant numbers. Stone, wood, and metal are all extremely rare materials in towns, and because of this, few industries based upon these materials can spring up.

In a Market one can find:

Below a Town are the sewers, accessible via several difficult to find locations in the streets above or from nearby waterways. Catacombs also reside below temples. Both the Sewers and Catacombs may connect up with the Dungeon. Entrances to the sewers are identified along with shops and houses in the fast travel map when you are in the vicinity of one.

Most towns have Criminal Organisations, formed by collections of outcasts. They are led by someone called the "Boss". Criminal organisations can take over the dungeon town keep, making the seemingly friendly town a deadly trap for wandering adventurers. 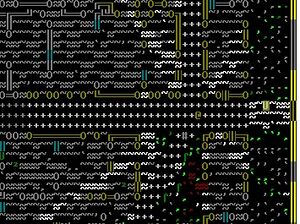 Ruins of a town before the gates of an abandoned keep

In time some towns will be brought to ruin. These become desolate wastelands where all of the peasants and merchants still living in the wreckage will attack you, perhaps out of fear, perhaps to stop you from looting the keep, where many fine objects lie unguarded.