The game's currency is measured in "☼" (White Sun With Rays, unicode character U+263C), called "dwarfbucks" or "db's" by some players. Each item has a specific trade value in ☼, determined by what kind of object it is, what it is made of, and (sometimes) how well it was made. Dwarfbucks are an important measure in trade for bartering goods, allowing both the merchant and trader to judge whether the bartered trade goods are equivalent or not. 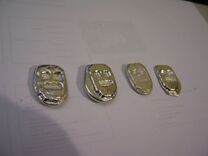 This is a stack of 4 Scythe 2008 pewter coins. This is a pewter currency of Scythe from the year 2008. On the front of the coin is a well-designed image of a dwarf.

Metal crafters may strike physical coins out of any metal at the metalsmith's forge. This process requires one metal bar and one unit of fuel, and produces one stack of 500 coins. Each stack of coins has an effective item value of 10, meaning that the value of a stack is 10 x material value of the component metal, and a given coin is (10 x material value / 500) of the value of the metal bar that produced it. For example, silver has a material value of 10, so a stack of 500 silver coins will be worth 10 x 10 = 100☼, and each silver coin in the stack will be worth 10 x 10 / 500, or 0.2☼ (fractional ☼ values are never displayed).

Coins have their own stockpile, and a bin in such a stockpile can hold over 100 stacks of 500 coins each. Coins are named based on the year they are minted and the name of your civilisation, and each coin in a given stack will be identical. For example if the year is 1058 and the name of the civilisation is Olon Ibesh, each coin in a stack of silver coins will be an "Olon Ibesh 1058 silver" coin. The coins also depict images and figures from the history of the civilisation. The images replicated on the coin can be of quality, but this does not translate into a quality grade of the coin itself. Every material and every year will get its own pair of images.

Coins and the Dwarven Economy[edit]

Coins are intended for use with the dwarven economy, but the economy is not currently enabled. In previous editions copper, silver, and gold coins had monetary value in addition to their intrinsic value, and dwarves would keep personal stacks of coins as part of their personal accounts. Coins of other metals were widely known as "collector's coins."

It is possible to construct danger rooms which train dwarves' armor user skills by flinging coins at them.

Coins are very commonly found in Adventure Mode. Virtually any intelligent being (dwarf, human etc.) you find will have coins in their inventory. Each civilization maintains its own currency, and coins minted by one civilization will not retain their value if you travel to a town belonging to a different civilization. For this reason, it can be more practical to exchange excess coinage for other small and valuable objects like gems. Coins are also useful for throwing at enemies.

As a curiosity, coins with quality levels can show up in adventurer mode. Bandit leaders receive quality equipment, which often results in them carrying coins with improved quality.