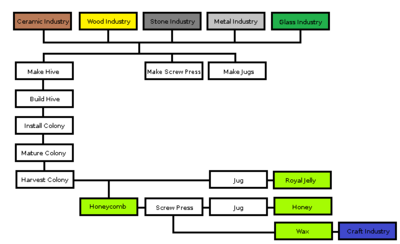 Before you can have a beekeeping industry you must logically have bees. There are two types of bees in the game: honey bees, which (true to their name) can be used for beekeeping, and bumblebees, which cannot currently be so applied (this may or may not change in the future). Honey bee colonies appear in any non-freezing biome in some number, but are not necessarily guaranteed to appear in your fortress surroundings if you embark on such a biome, especially if a large part of your embark site is incompatible.

Once you are sure you have a colony of bees, the next step is to create an artificial hive, either from stone or wood at a craftsdwarf's workshop, from ceramics at a kiln, from glass at a glass furnace, or from metal at a metalsmith's forge. Hives are tools stored in the finished goods stockpile, and can be built by a beekeeper using the Alt+h hotkey. In order to be productive, a hive must be constructed on or adjacent to a tile that is above ground. Dwarves will install colonies in hives installed underground, and such colonies will grow and allow splitting off new colonies, but they will not produce honey.

Once a hive is installed, it is automatically toggled to "install colony when ready", which will generate an "Install Colony in Hive" job onto the job list, unless the player specifies otherwise (with q-c). Hives can have colonies installed into them from preexisting wild colonies or from hives that are ready to split (more on that later); the beekeeper will walk to the location of the colony, pick it up and bring it to the built hive. Again, if there are no wild honey bee colonies on your map, no colony can be installed until there is one. It may be more sensible to build a single hive and then see if a beekeeper can find a colony to fill it with rather than go searching for one beforehand if it is uncertain whether or not there are any honey bees on the map. It will take a while until it is certain that the beekeeper does not have a colony available to collect and isn't just doing other stuff; if there is no available colony, the "install colony in hive" job will not cancel but rather stay "inactive" indefinitely.

Note: The colony in a hive set to "collect products" will still grow, but splitting off a new colony only becomes possible shortly before the hive is ripe for harvesting, and harvesting will always destroy the entire colony, whether it is ready to split or not. Consequently, dwarves will sometimes replenish hives from colonies set to "collect", but not reliably. To sustain a beekeeping industry without tedious micro-management, a healthy number of "breeding" hives are needed which are not allowed for collection.

Beekeeping as an industry is currently extremely buggy, involves a lot of micromanagement on the supply side, and doesn't produce as many products as it really should to be worthwhile. Most annoyingly, there is a bug where multiple empty hives will generate conflicting jobs targeting the same colony which reliably get beekeepers stuck Bug:3981. Consequently, a beekeeping industry must be grown quite slowly and measures must be taken to reduce the number of hives which are empty at the same time, like limiting the number of dwarves who may perform the beekeeping labour. Additionally, there is no way to tell beekeepers to prioritize fortress hives over wild ones for colony installation (except perhaps by using a burrow) - they will often wander far out into the map without even the ambusher's crossbows for self-protection. For these reasons the industry is typically seen as a novelty, at least until the kinks are ironed out.

Interacting with a hive (q) will show:

If interacting with the hive shows Not ready to be split then it might mean it has a colony too small to be split, or that it has no colony at all. To see if a hive has a colony, uses "view items in buildings" (t), which will show an item stack of thousands of bees if there's a colony. t will also show if the hive has a honey comb or lump of royal jelly.

If your fortress has more than 40 inhabited artificial hives, but less than 60, then interacting with a hive (q) will show:

Too many hives
* Output restricted

If you fortress has 60 or more inhabited artificial hives, then interacting with a hive (q) will show:

Too many hives
* No output

Presumably this means that existing artificial hives no longer grow, or that grown hives can't be split.

Harvesting a hive produces two items, one of which is a lump of royal jelly, which must be collected in an empty jug, an item used only by the beekeeping industry and in the production of rock nut oil. Royal jelly is a liquid food item, and so can only be used in cooking prepared meals, and only if another, solid food item is included in the meal. Every harvest will result in a single jug filled with jelly. The other item produced by a harvest job is the honeycomb, which is a little more complicated to process: it is considered a wax tool and doesn't have any direct application, but when pressed at a screw press produces two products, one jug filled with honey and a wax press cake, both of which are handled as food items for storage.

Harvesting a hive requires a jug (ae. you cannot harvest the honeycomb alone), as does pressing the honeycomb; carrying the products to their destination stockpile or production point is considered an item hauling job unrelated with the beekeeping labor, so after being harvested by a beekeeper they will be left at the foot of the hive until someone comes by to haul them off, unless the beekeeper has item hauling enabled themselves (in which case they'll send it to nearest applicable stockpiles). The same is true of honeycomb pressing.

Honey can be cooked into a meal or brought to a still and processed with a barrel or large pot into mead, the only non plant-based alcoholic drink in the game. Wax, meanwhile, can be processed into various wax crafts by a wax worker at a craftsdwarf's workshop. Wax crafts are not particularly valuable - they have a material value of one, the same as wood and non-flux stone - but they're something.