Scamps was the pet cat who adopted the Toady One. Scamps was useful for preventing unhappy thoughts. He was born on February 9th, 2009 and lived with the Adams brothers until June 15th, 2022, when he passed away from widespread lymphoma at the ripe age of 13.

Scamps is not a traditional megabeast. Scamps adopts his victim while he is a kitten. When Scamps hits adulthood, he will slash the victim's throat and drink its blood, which will turn Scamps back into a kitten, similar to a Fountain of Youth. Beware its dangerous eyes! 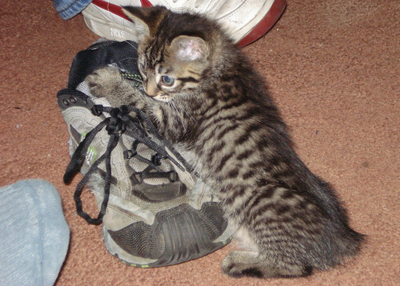 This is an engraving of Scamps and a shoe by 'Toady One' Adams. All craftsdwarfship is of the highest quality. Scamps is striking a menacing pose. The shoe is making a plaintive gesture. The artwork relates to the mortal wounding of a shoe by Scamps in the late Spring of 2009 during the umpteenth attempted siege of the living room by shoes.
Retrieved from "https://dwarffortresswiki.org/index.php?title=Scamps&oldid=264166"
Categories:
Hidden category: