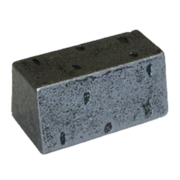 Iron is an important resource for a fortress, as an often-plentiful metal that can be used to make just about anything necessary, from weapons to furniture to trade goods. Iron is also a necessary ingredient in the production of steel, the best non-spoiler metal in the game for weapons and armor. If you are unable to produce enough steel in your fort, then the next best metal for military purposes is iron.

The three ores of iron, which are Hematite, Magnetite, and Limonite, can only be found in sedimentary layers, with the exception of hematite, which can occasionally be found in igneous extrusive layers.

Note that iron does not rust, so there's no harm in leaving iron objects out in the rain or submerging them in water.

Any of these iron ores can be smelted at a smelter to produce four iron bars. If you have a standard smelter, a bar of fuel will be necessary; magma smelters require no fuel to operate.

Iron will also be available through goblinite, as well as the dwarven and human caravans.

Iron may be combined with other materials at a smelter, mostly for the production of steel

Note that fuel is used as a reactant: even magma smelters need fuel for these reactions. A standard smelter will require two bars of fuel, one as a reactant and one to operate the furnace. This conforms with the process of carbonization of iron and pig iron in ferrous metallurgy in real life.