This page is a list of hidden or unexpected aspects of the game, once known as HFS, or Hidden Fun Stuff. Though technically 'HFS' is used in the dev logs to refer to anything Toady doesn't want us to know about until we find it ourselves, players have appropriated the name to only refer to... well, we won't spoil it for you.

When starting up the game, on the title screen where the player first chooses what to do, the top reads:

'...' will be generated each time the game is opened. Some combinations include "Histories of Avarice and Resourcefulness" and "Histories of Jealousy and Tenacity." Generally, the words will include a synonym each of "greed" and "stubbornness", which as we all know fit the hairy little blighters like a cave spider silk glove.

Some dwarves like Toads for their beauty, an obvious inside reference to Toady One.

Checking the weather, temperature, odor, or date in adventurer mode after dying will instead return a snarky message reminding you of your current medical state.

For about one frame, the word "Beyond" in the Bay 12 Games Beyond Quality intro turns into "Bey@nd". Nobody knows why.

In the Bay 12 Games Beyond Quality intro, a pig sound is played. When the program is saying "Quality", grab the title bar and drag it around a bit. Release, and when the lines appear, you'll hear it on its own.

If you press the ? key 4 times, you will be sent to a screen that appears to be the deepest part of the help menu, seeing as pressing ? from there will not do anything interesting.

Not quite an easter egg, but the sequence seen during the intro reflects the layout of a typical fortress from the old 2D versions, proceeding past the cave river and chasm and concluding with a miner breaching the magma river and causing a lethal flood. Nowadays, the ending scene of the intro serves as a teaser of a certain "circus", since the stone looks like "candy".

Toads as the default creature[edit] 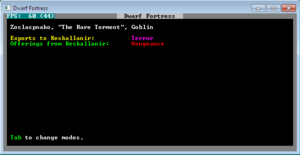 Trading is a serious business.

A small egg, mostly because few have seen it. An old fort that's around 50 years old or so will grow moss on its stone block constructions. Not much is known about moss, except that it can only occur in certain biomes.Verify for v0.34.11

Trade agreements with Goblins and Kobolds[edit]

If you view a Goblin civilization in the civilizations menu (provided that there is one) and navigate to the Trade agreements tab, it will say that you have an agreement with them that they provide you with Terror and you give them Vengeance in return. Similarly, viewing kobolds will reveal an "agreement" in which they import Petty Annoyance and you export Death.

All cats are legendary climbers by default. That's impressive, given that cats can't gain even Novice in any other skill, and especially given how difficult it is to reach Legendary Climber as an adventurer.

It's worth noting that giant cave spiders and many other creatures also have the same default climbing skill.