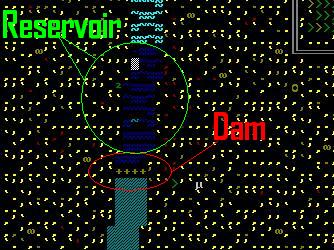 A dam can be built across a river or brook. This has several uses:

A river will not "overflow" its banks above its starting level because of a dam. (Note - if a waterfall is upstream, the upper level is the "starting level"!)

Finding the direction the water flows is probably a necessary step to take. This is actually fairly simple - at one end, the river falls off the map, and so is of a low water height. Check the outmost tiles of both ends of the river.

The easiest and quickest method of dam manufacture is only possible if your map freezes during winter. Simply dig out a thin section of channels across the river and build a wall out of floodgates, blocking the path of the water.

Another way is to drain the river. This can be done by building a tunnel next to the river that dumps into a chasm or deep valley. The dumping tunnel should only be one square wide, with a single floodgate to control it, as long as where the water first enters it has a fairly large number of squares of "Open Space" to move into. The water over Open Space will rapidly force its way down, forcing the rest to flow at warp speed. Be sure the floodgate is operational, as this sort of flow imposes terrible game lag while active. The more edge tiles drained from, the faster the level will go down enough to allow construction.

You can also dig to the map's edge, where it consists of rock, smooth it and carve the smoothed rock into fortifications in order to let water/magma flow off the edge of the map.

An alternative method to this is to use a large number of pumps to move more water out of the river than can be replaced by the water flow. For a river with a width of 4 tiles, you will need four pumps spanning the river pumping it into channels or tunnels, ideally off the map, a waterfall, or somewhere where flooding will not be a concern. While the pumps are operating, it will be drained enough to build the dam. A little more mechanic intensive method is using nine pumps, four to pump where your floodgates will go, four to pump out places for your workers to stand up/downstream, and one to keep a ramp clear to retrieve the dwarves. This method has the advantage on not needing channels/tunnels saving that layer for future construction.

If you don't mind obvious exploits, you can also build a row of pumps across the river, pointing upstream. In reality, this wouldn't work. In Dwarf Fortress, the water is pushed upstream and teleports off the upstream map edge. You need to wall in the pump outlets in order to contain the water and force it to teleport rather than spread.

If your dwarves are persistent enough you can also dig out a large chamber under the river at Z-1, channel out holes on both sides at Z0, and cover these holes with walled-in bridges. When you raise the bridges the water drops down; when you lower them it starts flowing again. This avoids the 'infinite hole' bug that can result if you use collapses to punch holes in the bottom of brooks.

If you wish to avoid loss of dwarven life then use staircases instead of channelling or cave-ins. Dig a row of up/down staircases (at least 2 z-level deep) under the river, then order downstairs be dug into the floor of the river, the dwarves will complete these from below, and provided you have a proper infinite drain, either map edge, caverns or aquifer, there is no chance at all of dwarves drowning. This trick can even be used to safely drain oceans (although just because it's safe, doesn't mean it's smart).

One other possible method of disposing of that water is channelling it to an aquifer lower than the river, it will absorb the pressurized water. The best part of this method is that the aquifer will likely be almost directly under the river, minimizing the needed construction.

An example of how to construct a magma dam.

If you have access to a magma source, you can pump magma into the flowing water. When the magma and water collide, the result is a tile of obsidian- an added bonus if you're in the market for making obsidian items. Pump enough magma into the river to reach both banks for a stretch at least 3-4 tiles wide in order to give your dwarves enough space to channel out the obsidian and place floodgates.
Beware: Pumping magma too close to the edge of the map could result in permanently damming your river! Obsidian tiles created on the edge of the map cannot be mined out! However, they can be opened to flow via smoothing and carving them into fortifications.

If you wish to move magma over a brook without damming it, constructed floors over the brook tiles work.

If your river is underground, you can use channeling to collapse a section of rock into it.Verify If this rock was constructed (i.e., you built it as walls or floors), it will revert to its component stones and sink to the bottom, not blocking the river at all. However, if the rock is natural, it will retain its shape and block the flow of water.

Since above-ground rivers normally do not pass beneath natural rock, this strategy is difficult to apply to them. But dwarven ingenuity should never be underestimated.

After your dam has been completed and looks something like the image, you can expect water to just stop flowing UNLESS there is a waterfall. If that is the case, the water will just flow around it after flooding a fair amount of space around it. If you messed up while making a magma dam and permanently obstructed the edge of the map, you can expect the entire world to flood up to the point where water enters.

Once the river has been drained (which can take a VERY long time), you may have to dig into the riverbed by ordering a channel to be dug in the open space tile above the tile you want to build on. The result of this, however, is that the tile is no longer considered a brook/river and it behaves like any other storage of water. It's no longer colored a pretty light-blue and nothing (including dwarves, caravans, goblins, etc.) can walk on top of it. This can be very annoying, so be prepared.

However, if your dwarves have access to the river bed they can 'mine' the bed out leaving the pretty blue surface (or dull grey surface when there is no water). you should leave some form of access to the channel at the farthest downstream point to let wanderers out of the bed if you decide to open your dam. 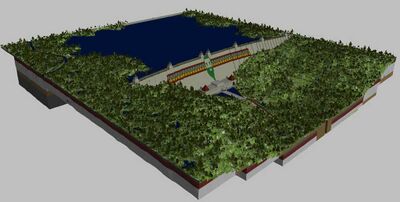