In Fortress mode, there are only 7 weapons* that dwarves can make for themselves and are considered "standard", but there are about a dozen other weapons that can be recovered from slain enemies who no longer have any use for them. Dwarves can use some of these, but not all, for melee combat, and each that is usable is associated with a standard military weapon skill. In Fortress Mode, no other missile weapons are usable by dwarves in combat, but all weapons are usable in weapons traps.

(* These are the battle axe, mace, pick, short sword, spear, and war hammer for melee combat, and the crossbow, which can be used for both ranged attacks and, if/when necessary, melee combat as well.)

As with any weapon, both material and quality can improve their effectiveness in combat.

In Adventurer mode, any character can use any of these, even if size should otherwise not permit it.

For a comparison of all weapons side by side, see Weapons: Weapon statistics.

Basically a small tube out of which you blow "deadly" darts.

No main race has this weapon, unless you mod it in. A dwarf can make a blowgun in a bowyer's workshop after being struck by a Strange mood. These weapons are extremely rare to find. Unfortunately in Fortress Mode you cannot create darts for use, and any dwarf wielding the blowgun will use it as a melee weapon.

When firing it increases the blowgunner skill. Melee with this weapon is a pathetically small bludgeon attack, and increases swordsman skill.

The darts don't do a lot of damage, but can still be almost as dangerous as arrows because they can pierce organs, which can kill instantly.

A bow works the same way as a crossbow, and does identical damage, except that it uses arrows instead of bolts. Dwarves cannot equip bows (stubby fingers), and the interface is such that they still cannot be wielded in Fortress Mode at all*, even with modding (though memory hacking will permit it). They can still be used in weapon traps, although you can't make arrows and so will be dependent on spoils of war to supply trap reloads.

When firing arrows it uses the bowman skill. When attacking with melee, it uses the swordsman skill, although it's a bludgeoning attack.

Arrows can also be thrown in adventurer mode for about the same results, except that it uses the thrower skill.

In Dwarf Fortress, any dagger is "large". Large daggers are wielded by Kobold and Goblin thieves only. They do small slashing damage, but have a critical bonus, which means they usually are not anything to worry about, but occasionally get brutally lucky.

In adventurer mode, no other race has them or can even start with one. If an adventurer finds one of these weapons, they can train with them. Those who use daggers always do slashing damage with them, there is no stabbing for piercing damage. In this game they are basically small swords, as they can sever limbs as well on a lucky hit.

These weapons use the Knife user skill.

A weapon comprised of one or more chains with a spiked ball or metal-studded bar at one end and a handle at the other. Does slightly more damage (8.3%) than the Morningstar, and uses the same skill, maceman. Goblins are known to wield these weapons.

The Great axe is a large version of the battle axe, doing 36% more damage. Too large for a dwarf to use.

In fact, this weapon is too large to be used by most races, even though two handed (Invaders tend to ignore this restriction).

A halberd is a long axe or a short pole-arm weapon, doing 27% more damage than a dwarven battle axe. It is two-handed for a human-sized character, but too large for a dwarf to use.

The Maul is a large heavy hammer and is the highest damaging melee weapon in the game, despite being a bludgeoning weapon. It can only be wielded by a human, and even then it requires both hands. It does 33% more damage than a hammer.

It uses the hammerman skill.

In fortress mode, invaders can use both a maul and a shield.

A Morningstar is a spiked ball directly attached to a handle. Does less damage than the flail. Damage is identical to the regular mace.

Uses the Maceman skill. Dwarves can equip it. 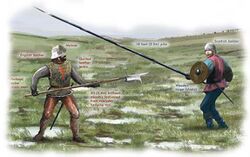 A pike is a very long spear. It does more damage than the normal spear by 20%, and still has the same critical boost.

This weapon trains the Pikeman skill when used in adventurer mode.

For unknown reasons, all two-handed weapons, including pikes, can be used one-handed by invaders, even by creatures who are smaller than the minimum size needed to use the weapon two-handed.

The Scimitar is a sword with a heavy curved blade. Its statistics are identical to the short sword, but it cannot be made of rock, and dwarves cannot make it at all. They can however use it one handed just fine.

The scourge is a slightly more deadly version of a whip. Although still doing weak damage, it causes gore damage, which can cause massive bleeding or pain. Effective against living, unarmored creatures. Very weak against non-living creatures.

It uses the lasher skill. Since dwarves cannot use this skill, it can be melted down or used in a Trap.

Big sword with high damage, 40% more than a short sword. Too large for a dwarf to use.

A whip is a weapon that does weak damage, but it causes gore damage, which can cause massive bleeding or pain. Effective against living, preferably small, unarmored creatures. Very weak against undead creatures. Whips are unusable by dwarves, but goblins use them sometimes. A better version of a whip is called a scourge.

It uses the lasher skill.