The ore of adamantine is absurdly valuable, and can be processed into one of the most valuable materials in the game, both in monetary value and utility. Its discovery is both a blessing and a curse; it has a massive value even unrefined, and weapons and armor made from it are very likely among the best possible. Its high melting point means you can easily use it to build magma-safe mechanisms and floodgates, but this is not recommended due to its scarcity and value in other items.

Raw adamantine has a Material Multiplier of x250. For a comparison to other mined materials, generic stone has a MM of x1, obsidian x3, native silver x 10, native gold x30, and native platinum x40. Processed adamantine "metal" has a multiplier of x300, the highest in the game of any material.

Adamantine is so valuable, both in price and usefulness, that a special message pops up when your miners discover a vein of it.

Word of Toady, and supported by all the careful research I've seen so far, is that there is one blue spire generated in every 2x2 embark grid, randomly placed amongst the four embark squares. Every 16x16 region square therefore has exactly 64 blue (and one special HFS). A 2x2 embark aligned to the grid will have exactly one blue spire. A 2x2 embark offset may have as few as none or as many as four blue spires. Over all the possible configurations of 2x2 embarks, your odds are as follows (rounded): zero blue, 20.4%; one blue, 60.6%, two blue, 17.8%, three blue, 1.8%, four blue, 0.1%, with an average (not surprisingly) of one blue; you also have a chance of special HFS of about 1.6%.

A 3x3 is guaranteed (barring serious program bugs) to have at least one blue, has an average of 2.25 blue, and a max of four blue, with a special HFS chance of about 3.5%. An unaligned 4x4 still has a minimum of one blue, but an average of four blue, and a max of nine blue; with special HFS chance of about 6.3%; aligning it with the grid gives you exactly four blue. Moving up to a 5x5 increases the minimum blue to four, with an average of 6.25 and a max still of nine; the special HFS chance is 9.8%. If you're planning on making the HFS a major part of your fortress and don't cheat with reveal, an aligned 4x2 is the smallest you can generate that is guaranteed to have multiple blue (and therefore a high chance of multiple entrances, reducing the risk that one of the spires will not be traversable). 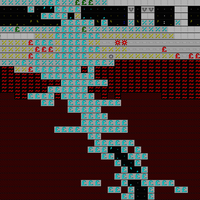 A profile view of an adamantine vein travelling through an underground cavern, solid rock, and a magma sea. For more detail and resolution click the thumbnail.

It's worth noting that a tile of Raw adamantine, when mined out, will always produce a stone. Raw adamantine veins, in contrast to usual ore veins, span z-levels nearly exactly straight upwards, and are thicker than many gem clusters. Adamantine veins can span from 5 to 30-40 z-levels, sometimes even significantly more. Despite being impossibly strong in its refined form, a simple copper pick works fine for mining it out, and the vein is full of raw adamantine ripe for the diggin'. Just make sure you don't dig too deep...

One serious downside to mining veins of raw adamantine is that they are hollow, and digging into the hollow section will lead to a certain spoiler, triggering dangerously large amounts of fun which can and usually will wipe out even a mature, heavily defended fortress. On the bright side, the location of all adamantine veins will be revealed at this time.

Adamantine can be found in vertical pillars in the magma sea. This makes mining difficult, as one must either drain the area around the pillar to mine the pillar fully, or in cases of thicker pillars, mine out only the interior without breaching the exterior layer (and thus flooding the interior with magma). However, with the access to vast amounts of water almost guaranteed on any map thanks to underground lakes, it might be possible to use selective flooding to cool the magma around the adamantine, and build walls of obsidian around them.