If a stone is not a layer stone, then it is found within a layer or another stone as a vein or a cluster. Veins and clusters do not jump z-levels, except by coincidence - a vein or cluster is limited to one z-level, but that doesn't mean the same stone can't be found above or below as well if the conditions (the surrounding stone) are right. However, multi-Z-level veins and clusters are planned for a future release.

Non-layer stone formations occur only in one of these four patterns:

Even if a block contains a large cluster, it will likely also contain numerous other independent veins or small clusters, even within the large cluster itself.

(* It's ~possible~ that these are 2 identical veins lined up end-to-end, but it's unclear if there is an upper limit as to how big a single vein can be.)

Two separate veins (of the same or different stone/ore) can be found "doubled", two next to each other, or folded back on themselves. Unrelated veins and clusters can also intersect or overlap with each other - only one type of stone/ore/gem will be found in any one tile, however.

Note that erosion (during world-gen, pre-embark) and underground caverns may reduce exposed veins and clusters to a fraction of their original starting size, and/or cut through them, exposing only the remnants, or two parts of a single vein in two nearby areas on the same z-level. 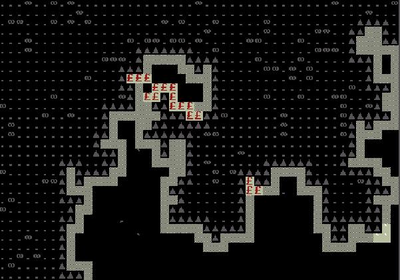 A single vein of hematite has been exposed on a hillside on the surface, cut and heavily reduced by erosion. The final count was far below average, not much more than twice what is visible.

It is common to find certain gemstones embedded only in certain veins or large clusters. For instance, to find rubies and sapphires, explore bauxite clusters; for diamonds, one should follow any kimberlite veins they find, which in turn are found only in gabbro layers. Knowing what stone (or ore) contains what veins and clusters can be useful in exploratory mining and to understand the information given to you before you embark on a new game, and complete information for each can be found on the wiki page for that stone/ore/gem.

Raw adamantine is neither a typical stone nor metal ore, and deposits of raw adamantine do not follow any of the normal patterns.