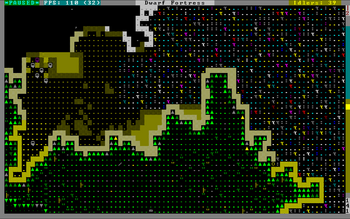 Extending a tree farm in a soil layer.

Tree Farming is the process of creating an environment in which saplings can safely form and mature into trees. Since planting trees is not possible, a more indirect approach must be used. This technique may be used to supplement a thriving wood industry. Tree farms require a large area and may not produce fast enough for impatient gamers due to the time requirements involved.

Creating a tree farm is generally straightforward, but depends on your situation and needs. Walling off an outside area may do, but if your fortress isn't in a thickly forested area then this may not suffice.

The fastest way to clear out a large tree farm is by digging out your soil layers while leaving the floors intact. Since soil is easy mined and requires no irrigation system this is the best option for those that it is available to.

Freshly irrigated tree farm next to a volcano

If the above options are not for you then your best bet is to dig out a large underground space and flood it. Locate a suitable level and set your miners to work. It may be beneficial to use many unskilled dwarves since the stone produced will need to be hauled away afterward. While your miners and haulers are hard at work set up an irrigation system. Large amounts of water will need to be utilized since evaporation is a significant force when dealing with copious amounts of liquid spread over open areas. Rivers and lakes make excellent sources, but be wary of slowing frame rates especially with lakes. Once every tile has been covered then you can opt to recycle the water by dropping it down onto a similarly opened out space below the first level. This way you may dig out larger farms without requiring more water.

Freshly watered or sporulated farms will require about a year of growing before trees pop up. In this time a few may show up early, but the majority will mature as a group within the span of a month of in game time. After it is clear cut trees will show up slightly more frequently and steadily at time progresses. It's important to leave it be as it works, so don't try to micromanage it!

Tree farms can double as suitable pastures, but trampling may lead to lowered wood production in the area occupied by grazers.

Saplings will not grow on soil that is occupied by rocky boulders, items, buildings or stockpiles. Removal of these obstructions will increase the area saplings can grow on.

Saplings of underground trees will not form in artificial areas until a cavern has been breached. Underground saplings will die if marked as Outside .

A sapling must fulfill a few requirements in relation to the environment in order to mature. Saplings will not mature if there are many others of the same species in the area around it. On top of this, surface trees must meet a certain density requirement based on the biome your fortress is in. If there are too many mature trees in an area then growth will be halted. Underground trees always grow with uniform density.