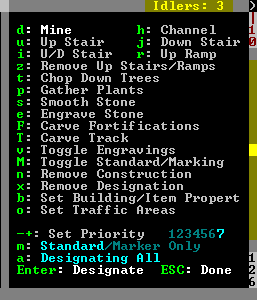 The Designations menu can be accessed by d and provides the means to mark tiles with various designations including Mining, Wood Cutting, Plant Gathering, Stone Detailing as well as removing constructions, controlling traffic and other miscellaneous designations.

To cancel a designation, use Remove Designations (x).

As of 0.40.20, all designations can be prioritized, with 1 being the highest priority and 7 being the lowest. Note that if two different designations have the same priority, one type may still be favored over the over. They also can be assigned as "Marker only", which is similar to the job being suspended.

Mining, stair carving, and ramp carving can also be modified to change their behavior. These modifiers can be switched with a.

Designations can be assigned a priority using + and -. By default, all designations are made with a priority of 4, but higher priority jobs can be marked by using priorities 1-3, and lower priority ones with 5-7. Note that + reduces priority; 1 is the highest priority, and 7 the lowest. When a dwarf has several jobs of different priority to do, the ones with higher priority are executed first, regardless of how convenient they are for the dwarf in question; a job marked '1' on the other side of the map will take precedence over a job marked '2' right next to them.

Notably, when in the designations menu, many designations such as mining will flash, repeatedly displaying their priority number. If this is not desired, it can be resolved by removing all designations of priority other than 4 (and if this fails, all designations), then saving and quitting. This will prevent the flashing or display of designation priority which some players may find annoying.

Designations can be placed in the default standard mode—the jobs are eligible to begin as soon as the game is unpaused—or in marker mode. Switch the mode of new designations with m. Marker mode designations appear cyan instead of beige.

Dwarves will not actually undertake marker mode designations. This can be used to plan future projects, and it offers a few advantages:

When it is time for your dwarves to begin a marker-mode project, designate a Marker/standard toggle and choose an area that contains all the marker designations you wish, in all three dimensions. All marker-mode designations within will change to standard mode, and vice versa. This can be used to temporarily deactivate existing standard designations as well.