A consort is a special type of noble who serves as the spouse of a land-owning noble. They have no room requirements (though they will share their spouses' rooms and gain their benefits by proxy) and do not show up on the nobles screen.

Consorts can appear as spouses to barons, counts, dukes or monarchs. They do not perform any meaningful function (other than interacting with their spouses and producing children), and make no mandates or demands. Consorts are not guaranteed to exist in a fortress, as the noble may just happen to not be married, but any future marriages will lead to their spouses automatically being elevated into consorts.

If a consort dies, then no new consort of the same type can be created until the original noble themselves remarriesv0.47.01. Forced socialization can be used to cause this. If the current noble dies, then the consort will also be replaced or removed based on the marital status of the heir that assumed the throne. In some cases, no heir, or an heir not present at the fortress, may exist to assume the throne - when this happens, the position of consort will simply cease to exist in your fortress. The exact mechanism of selecting an heir is not yet well known, so it is not feasible at the moment to select the consort by arranging unfortunate accidents for the noble.

The naming of consorts can be confusing; for example, the king consort is always the husband of the monarch and the queen consort is similarly always the wife of the monarch. Interestingly, the plural form of consorts are not as obvious as they seem, i.e. "king consorts", but rather "kings consort". This is because the "consort" serves as an attributive adjective and not a nominal portion of the noun phrase.

In fortress mode, when an eligible noble is elevated to a governing position, their current spouse, as consort to the holder of that position, is conferred a corresponding title. For example, if a married dwarf becomes a baron, that dwarf's spouse then becomes a baron consort (if male) or baroness consort (if female). Alternatively, consorts can accompany their spouses if they happen to immigrate to your fortress, which may be the case when the monarch makes their arrival. This dwarf is always a historical figure, and so can possibly be a night creature. Through a mountainhome's evolution, the consort can change or disappear many times.

As historical figures, consorts are also eligible to arrive without their spouse. This may or may not be a bugv0.34.07. 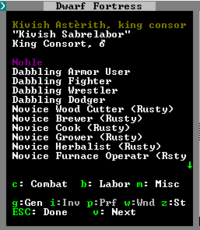 Consorts are sometimes displayed like a noble, and sometimes like a citizen. Note the lack of a purple name.

Consorts will be displayed in the units screen as having the job "Noble" in purple text, but they will not have the distinctive purple colour characteristic of all nobles. Instead, they appear as the colour of their highest profession in both the units screen and the display.

When the cursor on the units screen is placed over the consort's name, the foreground of the name becomes purple (similar to most nobles), but otherwise keeps the colour of their profession (similar to the militia commander). This suggests that the game may treat consorts sometimes as nobles and sometimes not. Whether this has any effect on noble-specific thoughts is unknown.

Interestingly, consorts have exactly the same precedence as their spouses. This means that no other noble status will override the status as a consort, with the obvious impossible exception of also being the same type of noble. This has no effect on anything but the titles this unit receives and its display in various screens.