Burrows are user-defined areas in your fort for restricting jobs or/and dwarves. They are a way to limit the jobs your dwarf takes, what items they use or where they go, thus being an important tool for Fortress Defense. A burrow can be used for one, multiple, or all of the above at once.

You'll be presented with a list of all of your existing burrows. Change which burrow is selected with your secondary selection keys (+,-, *, & /).

To add a new burrow to the list, press a. The new burrow created this way starts with no tiles and a default name.

To configure an existing burrow, select it, then press enter to set the burrow's name, change the symbol used, and define what tiles it encompasses by setting/erasing tiles. Defining the burrow's tiles can be done using keyboard to make rectangles or drawing with the mouse much like designating tiles. A burrow does not need to be contigious and can extend into unrevealed space and other burrows - in the latter case, it can help use different colors and symbols to help tell them apart.

Deleting a burrow is easy, just enter "define burrow" mode by pressing w, select the burrow to delete, then press d, and confirm with y. Uniquely to burrows, erasing all tiles in a burrow will not delete it.

Activation: Select the burrow with secondary selection keys, then press c to view citizens & resident list⁎, scrolling through it with those same keys and using Enter to add or remove one or more to/from the burrow.

A citizen limited thus will only accept jobs and items inside the burrow. When a citizen is in multiple burrows, they can accept jobs and items from all of them. Note that "job" here covers nearly anything a dwarf may do outside of walking, fighting and socializing, including tasks such as idle individual combat drills†, picking up babies or equipment, or even sleeping. Nor will they try to eat or drink anything outside the burrow until starving or dehydrating. 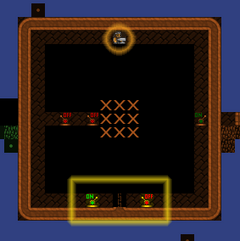 An illustration demonstrating that a burrow does *not* restrict a dwarf's movement--the metalcrafter marched right out of his burrow to pull the right lever.

Furthermore, this setting doesn't restrict jobs itself either. Should a job request an item not in the burrow, the dwarf will cancel the job. Then they'll look for a job again - often the one they just cancelled, thus entering a loop.

As such, a dwarf's burrow should include:

Take care to avoid dwarves having labors that result in them taking jobs that demand items outside the burrow:

Should one still need to use hauling labors, they should limit their stockpiles to links only and use Minecart hauling systems to move the requisite goods from outside the burrow to in. Otherwise, dwarves not assigned to the burrow can still do jobs in its area, including moving food inside.

⁎ The order of the citizens in the list is based on an internal ID number, which only loosely correlates with arrival time.

† However, active military dwarves are unaffected and can even perform those same drills.

Activation: Select the burrow with secondary selection keys, then press w to toggle the limit.

This setting behaves as if workshop or furnace is linked to take from stockpile. A building is considered affected by this setting when their center tile is in the burrow. A building limited by multiple burrows will be able to use materials from all of them.

There are some notable differences from using links, however:

Keep in mind that this affects only workshops and furnaces, and not any other buildings that accept items for their jobs such as traps, stockpiles, farms, etc...

Unfortunately, this feature can be enabled accidentally - (pressing w twice enters the burrow menu and toggles workshop restrictions for the first burrow). Due that it can be desirable to reassign one of these keys.

Activation: In main menu, hit m to bring up the military menus, and a for alerts.

(Optionally, using Up and Down arrow keys, select an alert you want civilians to currently use with Enter (default first entry, marked with [CIV]) in leftmost column - optionally creating a new one with c or using N to rename one.)

Then, navigate to the right Right and use Up and Down arrow keys to select the burrow(s) you want civilians to be restricted to with Enter.

To unactivate, unassign the burrow(s) or choose another alert to restrict civilians to.

Unlike individual citizen burrow assignments, a civilian alert will apply to all fort civilians and animals. It will order them to go and stay inside the burrows defined in the alert for as long as the alert is active and includes any. Additionally, for that time individual assignments are ignored.

Most jobs and activities will be cancelled when cut off by civilian alert. However, one should take a look around for any heavy items carrying stragglers that are trying to slowly move their items to inside the burrow, and stop their job so they can drop the item nd flee faster.

Burrows are one of the ways you can give passive orders to squads and civilians during alerts. Under the squad schedule menu (Press m s) you can add an order to any particular month for the chosen alert with o or edit their existing orders with e. On the Give Orders menu, use o to cycle through the orders given to squads. The order "Defend Burrows" cannot be given without first creating burrows to assign defenders to. Under a "Defend Burrows" order, dwarves in the squad will go to exactly in the specified tile(s) and will defend it proactively - however, schedules don't switch until next day arrives.

Broker to the Depot, STAT[edit]

You can define your trade depot as a burrow, then when the traders appear, add your broker to that burrow. He will then only accept jobs at the trade depot, though he may be delayed if he is asleep or fulfilling an urgent need. This is particularly useful if your broker insists on performing other jobs instead of manning the depot.

You can define small burrows to areas you would like to zoom to. Then by pressing "w", select the burrow, "z" to 'center on burrow' your view will be moved to earliest map block where burrow still has placed tiles. This is useful when you run out of hotkey slots.

If a dwarf is assigned to a burrow with no beds, then that dwarf can't sleep. If he stays Very Drowsy long enough, then he'll go insane. Whether this is a goal or danger to be avoided depends on your play style. It's easy to accidentally do this to children, since they'll keep on playing without giving much of a sign that they're about to have a mental breakdown.

Burrows can be powerful tools, but that also means they have the potential to cause many problems.