(If you're looking for information on the z key, see Status screen)

The third axis is known in math as the z-axis. It measures "up and down" distances. A z-level is one layer of the map that can be viewed at a time. Changing z-levels is done with the < (up) and > (down) keys. It was added to Fortress mode in version 0.27.169.32a; in prior versions, it was only available in Adventurer mode.

It's easy to think of a graph with an x-axis and a y-axis, right? 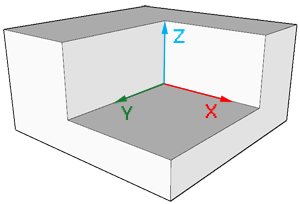 The z-axis, as you can see, is perpendicular to both the x-axis and the y-axis to create a 3D coordinate system, which is what Dwarf Fortress is based in.

Thus, objects described with only two axes are two-dimensional, whilst objects with depth measured along the z-axis are three-dimensional.

The z-axis is believed to be in part of the game engine that calculates accuracy of weapons based on where dwarves are, how missiles fly, and other similar considerations.[Verify]

Keeping track of where you are[edit]

In fortress mode, the right-hand margin shows your location on the z-axis. Blue is above ground, brown is below ground, and the bright spot in the middle (yellow or cyan) shows the current level. This reflects the elevation profile for the spot the cursor is currently over. Moving up or down will not change the position of the bright marker, but will instead shift the whole bar under it. The number at the top shows how many levels above or below the surface the spot currently is. The number at the bottom is the total elevation of the current level.

There are effectively two parts to z-layers - the layer itself (the z-level where stuff happens, things exist and dwarves work), and the boundary* between those layers/levels. These "boundaries" are just that - boundaries - they have no thickness, dwarves and items are never found there, and nothing ever happens there - but they act as barriers between adjacent layers.

(* The word "boundary" is not an in-game term. You will never see a boundary, only see the effects when one is pierced, giving access, desired or undesired, between levels. You can think of the "boundary" as the "floor", but that's not perfectly accurate in all situations - but close enough to start.)

...where each line is the boundary between the level above and below it.

The barrier is invisible - you only see the different layers. But once pierced, creatures and items can move/fall through a boundary, and miasma and fluids can pass through as well. With some actions, you remove just a layer, and with some you also pierce the boundary.

Mining is simply tunneling - you dig out the stuff of the level itself, and never touch the upper or lower boundary. Tunnels, rooms, and even up stairs exist on single z-levels. (Downstairs or up/down stairs too, but they pierce the lower boundary.)

When you dig a ramp, you pierce the barrier above you into the z-level above the level you are on. (The ramp is on the lower level only, but is also visible from the upper.)

Boundaries also act as "support" for building, constructions, and natural formations above them. If you channel out completely around something, and there is no "layer" supporting it either from above or below, it will collapse.

In open space, the boundaries have already been removed. Constructions, such as floors or walls, can replace boundaries between levels, re-sealing them.