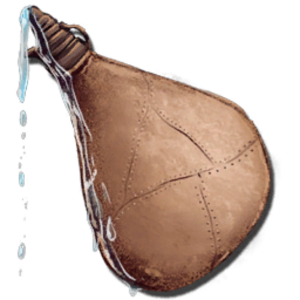 A flask, waterskin and vial respectively.

To drink from a waterskin/flask, hit e and choose "water" (or whatever you filled it with). To fill it, stand next to a water source, shift+interact with the flask and choose "fill".

When in adventurer mode, the water in the waterskin will freeze after some time in very cold weather. The resulting ice can be licked instead of drunk but doesn't quench thirst or melt from this action. The ice can, however, be melted using a campfire.