Difference between revisions of "DF2014:Semi-molten rock"

Semi-Molten Rock (SMR), represented by the tile ░, is generally found at the bottommost edges of great magma seas. Anywhere that magma is found rests on layer after layer of semi-molten rock, with no normal material to be found beneath it. There is also a layer near the bottom of the map composed almost entirely of semi-molten rock even where magma does not overlie it. Freestanding formations are possible, though less common. Though its name suggests the rock is hot, it is not dangerous to nearby dwarves. SMR acts as a barrier, and cannot be mined through by conventional means, nor smoothed. Unlike magma, SMR does not react with water, producing no steam or obsidian.

The top of semi-molten rock, or its floor when observed from the layer above, is described as a magma flow, appearing in blue text when examined with the Look cursor and resembling a river of magma slowly flowing to the south (just like it did in older versions).

The floor of the stone layer above the SMR at the bottom of the map is not a magma flow when stone is dug into, but appears as the same type of rock as the tile dug into. However, if a channel is dug down into the SMR from this tile, a magma flow floor is revealed; under this intact floor the unusable ramp will appear, if and only if the tile of SMR was previously unrevealed. Otherwise it will be unchanged. (As a result, no two of these ramps can adjoin) A magma flow also cannot be dug into, nor smoothed. However, constructions can be built on top of it, and these convert the magma flow into some other kind of stone or soil, which is sometimes useful sand or clay, appearing when the construction is removed.

Curiously, water dumped onto a magma flow with magma on top of it will not turn it into obsidian; rather the magma is simply removed. At the bottom of a magma reservoir with only small amounts of water falling in, such a tile can change from 7/7 to 0/7 and back in a few single step increments with the "." key. A construction (such as a stairway up) can be designated atop the magma flow when it is momentarily free of magma, due to water falling from above. Strangest of all, once designated, a dwarf can build this construction unhindered, without any job cancellations. Once the construction is present, magma and water can react in the square, destroying the construction and converting the square into unmined obsidian.

These odd exceptions to the normal rules mean that dwarves on a level partially filled with water can, with much effort, completely wall off the region surrounding some special point of interest, eventually removing all the magma from a large area, despite the failure of the usual magma-water interaction.

If the stone floor which replaces a magma ramp under a built-and-removed construction is channeled into a second time, the ramp below becomes visible from above. Unfortunately, for some reason dwarves still cannot descend into this square with the ramp, nor can they ascend out of it should they find themselves somehow there. A dwarf dumped into the space, say, by a remote controlled hatch "accident", cannot construct anything because the adjacent squares remain semi-molten rock, and won't turn to ramps if channeled from above. Therefore an up/down stairway cannot be constructed in this space, even if it is beneath another up/down stairway.

Semi-molten rock is not synonymous with warm stone, although any given tile of SMR may in fact be warm if it adjoins magma. If you're looking for magma and you find SMR rather than warm stone, your best bet is to do some exploratory mining several Z-levels up.

You can also dig up into semi-molten rock just fine (by designating an up/down staircase accessible from below). This also works only if the tile is still unrevealed. Often (but not always) you can't get down there without encountering spoilers first. 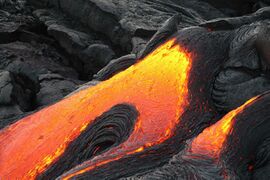 Channelling down into unrevealed SMR may open it into an Eerie Glowing Pit.

Tunnelling down through multiple layers of Semi-molten rock

Channeling through semi molten rock: It is possible to channel into semi-molten rock (and, to a lesser extent, slade) from above, as long as the tile below is not yet discovered. In older versions, you had to remove the magma-flow and ramps in a complicated procedure, that killed one dwarf per level, but now it is possible to channel directly into the underworld without losing a dwarf (though the miner tapping it will likely get killed by demons or drop into an eerie glowing pit). The difference is that in older versions the miner was placed onto the magma flow, but now he is placed under the magma flow, and can channel on.

Old method: Magma flows have very peculiar behavior. If you build a construction such as a floor, wall or upstair on a magma flow and then remove it, it will change into it into a stone or soil cavern floor. If the layer beneath is still unrevealed, you can then channel this new cavern floor to dig down through one layer of SMR. Doing so creates an unusable ramp below, and recreates the magma flow again. If you collapse a floor from a higher Z-level onto a magma flow that has an unusable ramp under it, it will destroy the unusable ramp and collapse the magma flow down one level. If you find a way to build a construction down the shaft and repeat the process, you can tunnel down through semi-molten rock.

This process consumes dwarves. Each layer of Semi-molten rock you dig though after the first will kill one dwarf. Choose some useless peasants and enable just the labors for mining, masonry and carpentry. Use locked doors to keep them in the room so the wrong dwarf doesn't get themselves killed. The dwarf can always escape the shaft as long as the upstair at the bottom of the shaft has not been removed yet. Be ready to engrave slabs, because the corpses will be incinerated by all of the magma.

1. While you can dig through SMR anywhere, it is advisable to select a location at the lowest elevation possible to limit the amount of effort (and dwarves) required. It is also advisable to back up your saved game prior to beginning, since it may be necessary to go back and choose a different location.

2. Dig a channel over the unrevealed SMR. This will reveal the layer underneath with an unusable upward ramp and create a magma flow floor tile where the channel designation was.

3. Collapse a constructed floor into the shaft. This collapses the magma flow tile to the bottom and destroys the unusable ramp. Use materials which will burn or melt in magma to build the collapsing floor. If only a single layer of SMR remains, the collapse will breach through to the expanse below. Any dwarf miner trapped in the shaft from step 2 will be crushed and killed.

4. Fill the bottom of the shaft with magma. The magma is used to melt and destroy all items present, including the dwarf corpse. If there is too much magma in the shaft, use a pond zone to pour water in one bucket at a time to cast obsidian and then carve up/down stairs. Remove the obsidian stones this creates because they will not melt in magma.

Don't proceed with step 5 until all items at the bottom have melted and dispersed. The only thing on the tile when you look should be Magma flow and Magma 7/7. Any molten magma globs (differs from Magma Liquid) will suspend constructions for the next step.

5. Use a pond designation and wait for a dwarf to pour a single bucket of water to remove the 7/7 magma at the bottom. Remove the pond zone.

6. The bottom of the shaft should be clear of all items, with no magma and no water down there. Construct a staircase down if there isn't already obsidian stairs, one layer at a time. At the bottom, build an upstair construction. Make sure the dwarf has a pick that will melt in magma. Then have him remove the staircase from top to bottom, one layer at a time. Use channel designations to remove obsidian stairs and remove construction designations for constructed stairs. When the bottom upstair construction is removed, the magma flow tile will be changed into a normal stone or soil cavern floor.

7. The magma flow tile has been transformed into normal stone or soil floor. Go to step 2 to start on the next layer down.

There may be many layers of semi-molten rock to dig through before reaching hell. Also, if you get really unlucky, your final floor collapse can break through into hell and land in an Eerie Glowing Pit. If it does, your FPS will be ruined. Make sure you have a backup save before starting this procedure. What happens is that the magma flow tile gets stuck in the middle of the Eerie Glowing Pit, but it is unsupported by any walls or floors and will perpetually collapse every single frame. Your FPS drop to the low single digits even on a modern gaming PC.

Upon breaching hell, the standard welcoming party will be spawned (if your map includes at least one adamantine spire). They will not, however, attack your fortress with the usual haste. This may be another facet of the "flying creature pathing bug"--presumably there is special code to handle the adamantine veins that does not apply to backdoor tunnels. They will eventually wander through the tunnel, and, once they can successfully path to your fortress, attack. The staggered offensive provides your dwarves with a much better chance to defend the fortress, though victory is still far from assured.