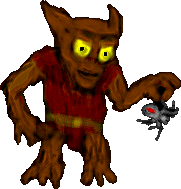 A kobold drawn by Toady One, from Kobold Quest, which also serves as their DF look.

Kobolds are small creatures adept at thieving that try to infiltrate your fortress and steal valuable items. They will run away once discovered. They are officially described as "small mammaloreptilian humanoids with pointy ears and yellow eyes with a penchant for trickery and mischief, context-based sublanguage, poisonous critter collection, traps and kleptomaniacal hoarding".

Kobolds arrive at your fortress in sneak mode, preventing you from seeing them. Spotting a sneaking creature is based on how high a dwarf's observer skill is; the higher it is, the farther away it will be spotted. But if a kobold is passing next to a dwarf or animal it will be revealed, too. They can swim in from rivers, go boldly through sprint straight through locked doors and they are not affected by traps. If the kobolds are successful in multiple thieving attempts, they will grow kobolder and send squads of armed kobolds to raid and pillage your apparently defenseless fort.

Kobolds are very weak in battle, however, as they are much smaller than dwarves and most hits will likely cause severe injuries to them; even basic punches will often cave in their heads. They tend to wield knives and daggers as they are often too small to wield larger weapons, so they have a hard time piercing even rudimentary armor. The abovementioned attack squads also arrive in sneak mode and will ambush any dwarves and traders on the map. Kobolds are observed to have access to all metals, including steel (seemingly, a fallback triggered due to them not being given access to any metals at all). This doesn't seem to manifest itself in fortress mode, however, and they are almost always seen with only copper equipment.

Kobolds are egg-layers, giving birth by laying 1 to 2 eggs at a time. Toady One has explained the game's kobolds were primarily inspired by Dungeons & Dragons, which portrays kobolds as reptiles, though DF's own kobolds are more akin to tiny brown-skinned goblins who can lay eggs.

Kobolds speak in unintelligible utterances, being completely unable to communicate with anyone but each other. 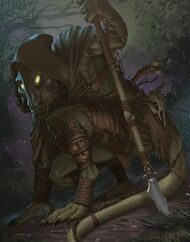 The ethics of kobolds can be considered the most primitive, besides those of goblins (which are basically non-existent). Generally, kobold morals are based on a tribal system of loyalty, with some exceptions such as an opposition to the devouring, butchering or consuming of intelligent beings, slavery, possession of trophies and to most forms of torture (except torture for sport). The moral focus on loyalty makes treason unthinkable among kobolds. Kobolds do not offer much in the form of punishment for crimes: assault is considered a personal matter, while a kobold found to have killed one of their own is forced into exile.

Kobolds consider cunning to be incredibly important, and also value nature, cooperation and perseverance. They, however, do not understand the concept of music, have very little empathy and are forgetful, probably due to death being commonplace in kobold society, so it is unwise to remember or care about loved ones for too long.

Kobolds are commonly known to congregate in small- to medium-sized groups, primarily inside caves. Studies [1] have shown, though, that they may also camp outdoors, living exactly as they do in caves, in a large group with piles of random jewelry and gems all around them. Assuming you can get past the kobolds, their wealth is all for the taking. It has been reported that it is possible to embark within these encampments, resulting in remarkably quick fun. Amusingly, they can and will attack kobold thieves that wander onto the map, which instantly triggers a loyalty cascade amongst every member of the camp, sparking a brutal and bloody civil war in which both sides try their level best to kill the other, often with their bare hands. Interestingly enough, one of the sides on the loyalty cascade will appear as hostile to your dwarves, while the other will appear as friendly. If the friendly kobolds win this civil war of sorts, you will be able to wander into their camp and take all their stuff or, if you are feeling particularly generous, build a little something for them. Sadly, this above ground camp will almost certainly be exterminated by the first goblin siege.

The fact kobolds are unable to communicate with other races makes them hostile to anyone in either mode, including a kobold adventurer.

Unlike other races, there are two large stereotypes associated with the kobolds by players: some see them as little more than vermin who only exist to annoy, and as such they go to great lengths for the chance to catch and kill kobold thieves.

The other, arguably larger group, however, treats kobolds as small, cutesy creatures who are endearingly stupid in their attempts to steal your trinkets, and as such gain great amounts of sympathy. These are typically given the name of "cutebold" (with the DF community possibly being responsible for creating the term) and are depicted as small, flappy-eared dog or lizard people rather than their canon "smaller brown goblin" look, who like rubbing their noses to display affection and are about as smart as an actual dog or lizard. Cutebolds are typically treated as being incredibly innocent, childish and ineffectual, which brings up interesting connotations when they interact with the gruff, hardy and fun dwarves. Whether they fall into "too cute to kill" or "just the right amount of cute that makes them VERY killable" is another matter entirely.

Kobolds are also widely regarded to be the best race in all of Dwarf Fortress.

Kobolds are the only unplayable race out of the five main races. By modding however, kobolds can be played in both fortress and adventure mode.

Kobolds only ever speak in [UTTERANCES], which means no one can understand them. As such, they will be hostile to everyone else, including other kobolds. If you wish to change this behaviour, you will have to remove that tag.

Kobolds can become a playable race in fortress mode if [SITE_CONTROLLABLE] is added to [ENTITY:SKULKING] in entity_default.txt. They cannot start with picks or axes, nor many of the skills needed to found a 'fortress' besides mining. While they can start with the materials to start a small metal mining industry to build those, they are considered foreign weapons and so cannot be built. Your kobold citizens are also considered pets and/or livestock by the game, and their labor preferences cannot be changed, due to lacking [CAN_SPEAK]. They can start with spears, short swords, bows, and large knives, but cannot form military squads, due to lacking any defined positions (including militia positions). Making this race playable requires a moderate amount of game file editing, with the following as a bare minimum to make them playable:

Multiple examples of Kobold Camp mods exist, generally descended from or influenced by this version or its successor. They were last updated for 0.30.01 and 0.34.11, respectively. Masterwork also contains an (out-of-date) version of the latter. The original is the closest to a vanilla kobold experience, while the other two restrict kobolds to wooden weapons and digging in soil only. There is also Kobold Kamp that settles on a stone-age flavor with some expansions, and remains actively updated.