Difference between revisions of "DF2014:Elf"

A medium-sized creature dedicated to the ruthless protection of nature.

Elves (singular, Elf) are smelly, stuck-up, arrogant tree-fondling hippies humanoids dedicated to the protection of their concept of nature (focused on trees).

During trade, elves will not accept wood, wooden items, or any goods decorated with wood. This includes clear and crystal glass items and soap, because wood-derived lye and pearlash are used in their production. (Dwarves cannot normally decorate objects with wood, but other civilizations can, so be careful with objects with decorations) Elves bring their own "grown" wooden items - those were presumably produced without cutting down trees. They will accept elf-made wooden items in trade, but not wooden items made by anyone else. Be careful not to offer them your wooden bins or barrels, or quivers containing wooden bolts/arrows - if the contents of bins are marked for trade individually, and are not wooden themselves, the elves will not care that you used wooden bins to haul the goods to the depot. You may also steal from them or even kill/torture them without fear of repercussion: merchants will not resist if you seize their goods and will not competently fight back if attacked. They will generally accept items made of green glass, stone, metal, bone and other refuse, silk, leather, plant fiber cloth, meat and fish, totems, and even plants, as well as animals in trade, as long as those are not held in dwarf-made wooden cages, and also raw clear glass and raw crystal glass, even though these are made using pearlash, and ash-glazed items. Despite the name, petrified wood is a kind of stone and therefore acceptable in their precepts. (Apparently it's okay if the tree died of natural causes a long time ago.)

They have no facial hair, but, rarely, they have at least stubble. Like goblins, they are biologically immortal and will only die to violence and disease. Unlike other races, elves do not worship deities, but rather forces which permeate the forests. Elves speak the elvish language.

Some stupid, useless, tree-fondling traitors dwarves like elves for their grace. 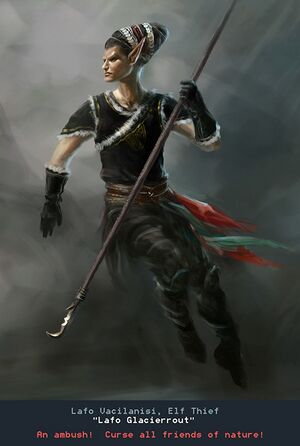 The elven diplomat will arrive approximately halfway through the first month in spring. At some point the diplomat may revisit your fortress to establish a treecutting quota. 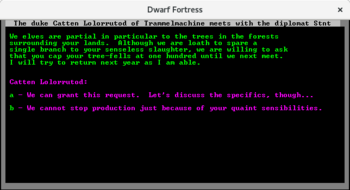 Although the first screen lists a quota of 100 trees, accepting this offer leads to a negotiation phase, where the limit may be different from 100. 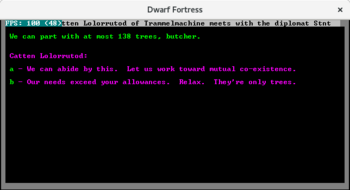 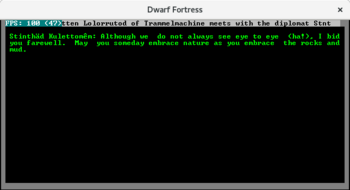 If the player agrees to a treecutting meeting, it will be visible after selecting the elves in the Civilizations screen and pressing Tab a few times. 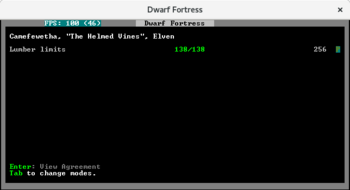 Note that the quota is measured in trees, not logs, so be sure to fell only the largest trees on your map to get the most out of your agreement. Also note this quota also affects subterranean mushrooms like tower-caps and fungiwoods, as despite being fungi, the game classifies them as trees.

List of what you can expect in an average elven caravan:

All wooden products made by elves are called "grown". Unlike regular wood, these may be traded back to the elves without repercussion, otherwise, they are identical to the wood that you can produce. 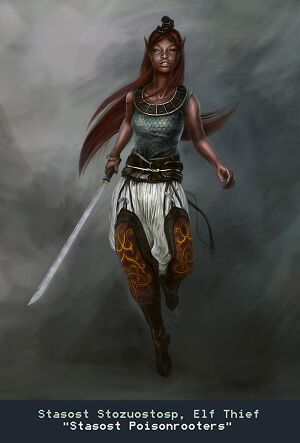 Elven civilization ethics often differ from those of other races. Their position on moral philosophy will likely put them at odds with humans, goblins, dwarves, and sometimes kobolds and animal people, although they favor war with goblins over other races. At any given point in time, elves and dwarves are likely to be at peace, but it is certainly possible for an elven civilization to be at war with a dwarven one at the end of worldgen. Use the tab button when selecting an embark site to view whether elves are at war with the currently selected dwarven culture, and cycle dwarven cultures to find out.

As ghastly as the concept may be, elven cultures have become more powerful since the days of Tholtig Cryptbrain, and it is entirely possible for one or more dwarven civilizations to be extinct due to elven aggression. What elves lack in engineering, crafting, intelligence, bravery, skill, or hygiene, they make up for in raw, unwashed numbers, and once-mighty dwarven civilizations may crumble to the hordes. Even more troubling is their employment of mercenaries, often much better equipped than the elves themselves. Embarking with (possibly homeless wandering survivor) dwarves claiming to be from that civilization is possible, but always starts at war with the elves that claimed those poor souls' lives, and you may not get migrants.

Elves are the only race which wholeheartedly accepts the devouring of enemy combatants. Looking in legends mode shows that an elven combatant will sometimes devour the other person they were fighting when they win. In spite of this, elves refuse to butcher and consume intelligent beings under other conditions. Elves find torture as an example acceptable, but condemn other forms of torture and consider torturing for information misguided. To elves, keeping any trophy of any kind is an unthinkable act. Elves begrudgingly allow for killing animals when done in self-defense, and the killing of other elves by an elf is justified if there is an extremely good reason for doing so. For elves, the killing of plants, especially trees, is unthinkable. On the other hand, the killing of neutral beings and enemies is acceptable. Elven society seems to be regulated by shame from the community, rather than by threat of punishment. As such, elves never offer serious or capital punishment to criminals; instead, elves found to have committed vandalism, trespassing or theft are reprimanded, while those convicted of treason, lying, breaking oaths, assault or participating in slavery are forced into exile.

Elves value nature incredibly highly, and they also place a degree of value on family, eloquence, cunning, artwork, fairness, merriment, competition and romance. Elves do not especially respect commerce and have a dislike for self-control.

Note that these are merely the ethics of elven civilizations. Elves may adopt the cultures of other races via wandering individuals joining civilizations, or when conquest absorbs elves into another civilization. Sentient creatures adopt the values and ethics of their culture, regardless of race. Elves living among, or even leading, dwarves will have dwarven ethics and values, and vice versa.

Due to Dwarf Fortress making ample use of the "elves as stuck-up jerks who live in trees" stereotype (which is especially noticeable when talking to their diplomats), the race as a whole tends to be widely disliked by players, who aren't too happy about said stuck-up jerks trying to tell their dwarves how to live their lives. Unlike goblins, however, elves are rarely considered a threat due to their insistence in using equipment purely made out of wood in battle, which is only marginally better than fighting unarmed and generally stands no chance against a half-competent, metal-clad dwarven militia. Because of this, elves have a reputation among the community of being all-bark-and-no-bite wimps who serve as the perfect punching bags to be on the receiving end of whatever stupid dwarf trick the fortress is currently conducting, especially if it's a particularly violent one. If a player is telling a story about a gruesome incident of sorts, there's a high chance it'll involve at least one elf as the victim.

The elves' nigh-religious devotion for trees is also a point of note; many players will go as far as to raze their map clean of trees, for no reason but to spite the elves and provoke them into attacking, just for the chance to slaughter them all. Unlike most other fantasy settings, Dwarf Fortress elves don't really have any redeeming characteristics (they aren't any more attractive than a dwarf, human or goblin, aren't good smiths, and don't have any superhuman abilities beyond biological immortality), though most long-time players play their antics for laughs, resulting in them essentially being the community's collective chew toys.

Being compared to an elf is particularly insulting, as it implies you're an unwashed, tree-loving, cannibalistic hippie. That's not to say that elves are universally disliked, however: some have earned the liking of the player base, typically due to them being part of a dwarven civilization (and as such not acting like elves), with Cacame Awemedinade being one of the community's most well known and beloved characters.