A small carnivorous animal found in temperate climates. It has orange fur and is known for its cleverness.

Foxes are small carnivores frequently found roaming through temperate forests. They can be mildly dangerous, but are generally more of a nuisance than a threat. A woodsdwarf or miner armed with an axe or pick can easily dispatch a fox, but non-military dwarves will probably cancel their jobs and run away instead.

Wild foxes can be tamed by an animal trainer and kept as low-value pets, though they cannot be further trained. Foxes can be butchered for a bit of meat, but there are often better creatures to raise for a meat industry. While fox fur has notable value in real life, fox hides in Dwarf Fortress have the same default value as most other animal hides. 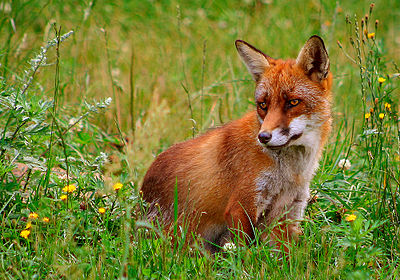 Admired for their cunning.
Retrieved from "https://dwarffortresswiki.org/index.php?title=v0.34:Fox&oldid=245119"
Categories: